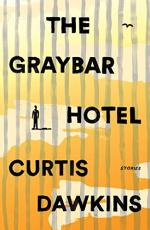 Curtis Dawkins
This Study Guide consists of approximately 59 pages of chapter summaries, quotes, character analysis, themes, and more - everything you need to sharpen your knowledge of The Graybar Hotel.

This detailed literature summary also contains Quotes and a Free Quiz on The Graybar Hotel by Curtis Dawkins.

The following version of this book was used to create this study guide: Dawkins, Curtis. The Graybar Hotel. Scribner, 2017.

In County, Italian Tom arrives to the county jail, where he joins a cell with the anonymous first-person narrator. Tom talks about his life until a new, drunk inmate nicknames him “Frankenstein” and Tom retaliates by persuading him to push the emergency button. Sick of jail, Tom orchestrates a fake suicide to expedite his transfer to prison. The narrator rushes to help Tom until officers take action but falls and strikes his head.

In A Human Number, the anonymous first-person narrator calls strangers from the phone book, reaching someone named Kitty-Kat and then losing his number. He speaks with a retired mechanic, a religious woman, an angry man, and, when all else fails, lawyers and their secretaries. Someone visits the narrator in jail but leaves before the narrator has a chance to see them, so he instead imagines Kitty-Kat visiting him. The narrator finally finds Kitty-Kat’s number and calls him.

In Sunshine, George sobs to his cellmates: His girlfriend, Sunshine, visited the jail that day to tell him she has cancer. The anonymous first-person narrator remembers when a man killed himself in another jail wing and how the man’s sister came to collect a paper bag of his personal effects. George says Sunshine already started losing her hair and the doctor diagnosed her that day, a contradiction the narrator points out. George goes silent and turns to the broken TV to listen to a soap opera until the TV dies.

In Daytime Drama, Arthur attempts to impress an inmate by doing push-ups. He proposes a trade with the inmate: his breakfast for the man’s fake teeth. Arthur recalls a memory in New York and loses track of time. An officer then escorts Arthur to a meeting with the psychologist, Doctor Stan, who must assess Arthur’s mental state for his video arraignment. Arthur faces a lifetime sentence, but the judge orders a competency hearing. Upon return to the cell, Arthur envisions himself flourishing his blanket as a cape.

In The Boy Who Dreamed Too Much, six jail inmates transfer over to quarantine. After they are processed, Mickey admits to the anonymous first-person narrator and a few others that he robbed a bank in a clown disguise. The narrator’s former cellmate, Ray, breaks down in hysterics about their new situation, but his spirits lift when he embraces the idea of death as a fantasy. Later, Ray and Micky fight over Micky’s obsession with his dreams. A couple days later, on their way through fog to a psychological test, Micky veers off into an off-limits area and a shot fires at him.

In 573543, the anonymous first-person narrator remembers when he started using the drug ketamine. One night in prison, the narrator notices his cellmate, Pepper Pie, physically vanishing. A guard walked by one day and noticed Pepper Pie’s Bible sticking out from under his mattress, which is not permitted. Consequently, the guard ordered the narrator to move the book, and the narrator discovered the pages had been replaced with the same handwritten line. The narrator and Pepper Pie bond over playing softball and watching baseball, and the narrator eventually tells Pepper Pie he knows about his ability. A bout of bad weather delays the softball tournament. After an argument with an officer about the delayed game, Pepper Pie disappears and travels through the cell wall.

In the Dayroom with Stinky starts with the anonymous first-person narrator playing cards with Stinky. The narrator watched the Cold Case Files episode about Stinky's case, but believes Stinky is innocent. Stinky took out an insurance policy on his wife, an addict, and she disappeared shortly afterward. A random woman came forward claiming Stinky told her he had murdered his wife and fed her body to hogs. After their card game, Stinky tells the narrator he prayed for him and his children.

In Swans, the anonymous first-person narrator smuggles weed into the prison, smokes it, and watches the news. On the broadcast about swans he notices graffiti on a bridge, which triggers his memories of his last year of high school, when his friend and drug dealer Crash attempted to breed swans. The narrator and his friend, Ricky, hung out at Crash’s shack by the river to smoke. Crash always hatched harebrained schemes, but this time, all his swans contracted an illness and the narrator and Ricky had to burn them to prevent potential contamination. Crash threatened to kill himself and threw himself into the river. The graduation party the narrator and Ricky had been planning to host at Crash’s place instead took place in a field, where one of their classmates told the narrator she hoped, one day, he would not need drugs to escape.

In The World Out There, the anonymous first-person narrator watches a televised baseball game from his prison cell and spots a girl texting next to her presumed boyfriend in the stands. He imagines their story, with the girl texting her friend about her future college life and her plans to dump her boyfriend, who remains oblivious. The narrator imagines the game and their relationship ending.

In Six Pictures of a Fire at Night, the anonymous first-person narrator questions Catfish about his summer stint cleaning up after suicides. The narrator read Catfish’s transcripts; what sticks out most in his memory is Catfish taking the stand in his own defense and telling the judge he continued fishing for catfish after he killed his wife. However, the narrator thinks Catfish took the blame for his sister, who the narrator believes killed Catfish’s wife over drugs. Catfish describes to the narrator the last suicide house, in which he found a series of six photos of a local fire. Catfish remembered the night of that fire. He thought an airplane had crashed, an answer to years of dreams of crashing aircraft. But it was not a plane crash. The narrator could not stop thinking of that fire and how Catfish must have felt he was “driving to his destiny, no matter how horrible it was” (137).

In Depakote Mo, the anonymous first-person narrator designs cards and tattoos for money to pay off his tobacco debt, which has spiked since the state started rolling out a tobacco ban in prisons. A new inmate, who goes by Maurice or Mo, arrives to their cellblock wearing a bandage around his head from a drug lab explosion injury. He also takes the drug Depakote for the consequent seizures. When a prisoner brutally beats one of the officers, the prison goes on lockdown and officers toss the cells. In the toss, the narrator loses his tattoo kit, and thus his means to pay off his debt. Once the men are permitted back in the mess hall, a group of inmates protests the punishment by refusing their meals. The next day, an inmate approaches Mo and the narrator as they are walking, threatening the narrator about his debt. Mo then divulged to the narrator that he fakes seizures for the drugs. In another protest, some of the men gather outside and walk slowly as a collective around the track, causing officers and the warden to intervene. Suddenly, Mo pretends to seize. The narrator steals one of the officer’s Tasers and shoots the warden right before another officer electrocutes him.

In Brother Goose, an inmate tells the anonymous first-person narrator he has witnessed birds’ feet bleed after landing on the prison razor wire. The narrator dismisses it as a lie, but recalls a man’s bloody, failed escape through the wire. Then he remembers the goose that did the same, but flying into the prison.

In Engulfed, the anonymous first-person narrator ends up with a new cellmate named Robert who displays a fantasy life on his bulletin board. Robert lies to the narrator about his life. The narrator remembers his life as a conman and the woman, Mary, and her figurines that made him decide to change his ways. He tells Robert he will help him become a better liar, but Robert responds with the silent treatment. The narrator reads his Beverly Hillbillies retrospective to Robert; Robert ignores him and crafts figures from bars of soap and shoe polish. One day, a guard storms into the cell and confiscates a gun, made from soap and shoe polish, from under the narrator’s pillow. The guard escorts the narrator out of the cell. The narrator remembers when Mary, a set designer for a university’s forensics department, took him to work and how, there, he told her the truth about his con. He was arrested that night. The narrator lies about his mom being an actress from the Beverly Hillbillies.

In Leche Quemada, recently released Clyde returns home to his partner, Melissa, after serving a 12-year sentence. He struggles to adjust to life outside prison walls. Melissa shows him the basement, redesigned to look like a womb. Clyde flashes back to a group of Hispanic inmates who made candies in prison. In the basement, Clyde takes a nap, which provokes a spat between him and Melissa. After he awakes, he cooks the prison candies. He tries one and hates it. He promises himself, once he adjusts, to do everything better this time around.

More summaries and resources for teaching or studying The Graybar Hotel.