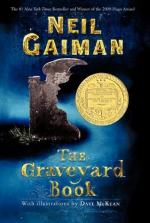 Neil Gaiman
This Study Guide consists of approximately 25 pages of chapter summaries, quotes, character analysis, themes, and more - everything you need to sharpen your knowledge of The Graveyard Book.

This detailed literature summary also contains Topics for Discussion and a Free Quiz on The Graveyard Book by Neil Gaiman.

The Graveyard Book by award-winning author Nick Gaiman is a novel about a baby raised in a graveyard by the dead. Nobody Owens' entire family is murdered in the middle of the night when he is only eighteen months old. Nobody escapes by wandering into an old graveyard and is adopted by a couple buried there for more than a hundred years. As Nobody grows up, he learns all there is to know about being dead and haunting the living, but must continue to hide in the safety of the graveyard until the man who wanted him and his family dead is found. The Graveyard Book is a story of an unusual child and his unusual childhood, one that starts out to frighten but ends up enlightening the unsuspecting reader.

A baby wakes in the middle of the night and finds the front door of his home open. Unaware of the danger that follows him, the baby walks to an ancient graveyard on the hill above his family home. A killer follows, intent on killing the baby as he has the child's entire family. Instead, two ancient souls who have been buried in the graveyard for more than a hundred years take the child under their guard, promising the spirit of the child's dead mother they will care and protect him from the killer.

The graveyard votes to give the child Freedom of the Graveyard. This permits the living child to have access to the entire graveyard, including locked and sealed areas that the living would normally not be able to access. The ancient couple, Mr. and Mrs. Owens, adopt the child and name him Nobody because he looks like nobody but himself.

When Nobody is four, a young girl the same age as him begins coming to the graveyard. The girl, Scarlett, befriends Nobody and often plays with him in the graveyard. Due to the fact that they never see him, Scarlett's parents think that Nobody is an imaginary friend. One day, Nobody takes Scarlett into the tomb of the most ancient of the graveyard's residents. In this tomb they run into a person they dub the Indigo Man, who attempts to scare them away. Nobody, however, is not frightened. Scarlett's parents become frightened while Scarlett and Nobody are in the tomb because they cannot find her. A short time later, the family moves to Scotland.

A few years later, Nobody, now called Bod for short, learns that his guardian, Silas, is going away and he will be cared for by Miss Lupescu. Miss Lupescu feeds Bod things he does not like and forces him to learn things he does not want to learn. One day Bod runs into a couple of ghouls and quickly finds himself on the road to their home city. Bod is frightened, but he does not know what to do. In time, a large grey dog comes to rescue him and Bod realizes this dog is Miss Lupescu. From that moment on, Bod decides to pay attention to what Miss Lupescu has to say.

Several years later, Bod comes across an area of the cemetery where there are no headstones. This area is unconsecrated ground where the poor, criminals, and witches have been buried. Bod meets the witch, Liza, and decides to get a tombstone for her. This requires going into town and speaking with the living, something Bod has never done before. Bod quickly finds himself in trouble with an unscrupulous pawn broker, but Liza comes and rescues him.

Eventually, Bod comes to the decision that he needs to go to school with the living so that he might one day be able to survive in the real world. Silas supports this decision and sends Bod to school, but Bod quickly gets himself into trouble with a couple of bullies in the school. When Bod is arrested and nearly taken to juvenile hall, Silas and Bod both agree it would be better if Bod not attend school.

Bod lures the man Jack and his other companions into the cemetery where he disposes of them one by one. In the end, the man Jack is taken away by the sleer who protect the ancient tomb. Scarlett leaves the cemetery, unable to understand why Bod had to kill all those men.

A short time later, Bod finds himself unable to see and do the things he has always been able to do in the cemetery. It has come time for Bod to leave. Silas gives Bod money, clothes, and a passport that will allow him to finally explore the world as he has always wanted to do.

More summaries and resources for teaching or studying The Graveyard Book.