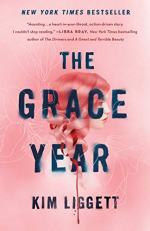 Kim Liggett
This Study Guide consists of approximately 65 pages of chapter summaries, quotes, character analysis, themes, and more - everything you need to sharpen your knowledge of The Grace Year.

This detailed literature summary also contains Quotes and a Free Quiz on The Grace Year by Kim Liggett.

The following version of this book was used to create this guide: Liggett, Kim. The Grace Year. St. Martin’s Publishing Group, 2019.

The beginning of the novel takes place during autumn in a place called Garner County. The first person narrator, 16-year-old Tierney James, dreams of a mysterious girl with a red mark beneath her eye, a red flower, and a group of women meeting in the woods.

Tierney awakes and prepares for her grace year. The county believes that when a woman turns 16, she harbors dangerous magic, and thus must be sent away for that year. However, first Tierney must attend the veiling ceremony, where all eligible bachelors choose a wife. Tierney, known for being a rebellious tomboy, doubts anyone will pick her.

To Tierney’s surprise, her best friend Michael chooses her as his wife. Tierney then leaves with the other grace year girls and enters into the outskirts. The girls must not stray from the path or they will be killed by poachers, which are a group of men who harvest grace year girls’ body parts to sell them as an aphrodisiac and youth serum. However, when Tierney accidentally veers off the path, a poacher approaches but does not hurt her.

On the way to the camp, Tierney sees her friend Hans who works as a guard for the county. Tierney became friends with Hans as a child, so he promises that if anything happens to her, he will save her. The girls enter the camp, but the guards do not follow as they believe the camp is cursed. The camp smells of decay and their only water source is a well full of green algae.

A girl named Kiersten is immediately hostile towards Tierney. Kiersten convinces both herself and the others that she has already come into her magic, and has the power to control others with her thoughts. Kiersten begins convincing the other girls that they have magic, too, but Tierney refuses to partake. Tierney grows closer to a girl named Gertrude, who is also a victim of Kiersten’s hostility. As time goes on, Tierney begins to feel sick, dizzy, and confused.

Kiersten attacks Tierney for not accepting her magic, calls her a heretic, and turns the whole camp against her. The girls deny Tierney food and water, and when Gertrude sneaks Tierney some food, Kiersten punishes her by cutting off part of her scalp. Then, she banishes Tierney to the woods.

It is now winter. In the woods, Tierney’s head feels clearer but she struggles to survive. Tierney eventually returns to the camp to find that all of the girls are acting mentally unstable. When Kiersten sees her, she hits Tierney’s shoulder with an axe and chases her back into the woods. A poacher then chases Tierney onto a frozen lake, so she breaks the ice, falls into the water, and loses consciousness.

Tierney awakes to see she has been taken hostage by the poacher. She is unable to see or move her body as the poacher cuts and burns her. When she can move again, Tierney tries to run away, but the poacher grabs her just as she steps off the ledge of the treehouse. It turns out the poacher has actually been cauterizing her wounds. When she asks why he is helping her, he tells her that he knows her father and owes him a favor.

The poacher’s reveals his name is Ryker, and over time, he and Tierney grow close. Ryker works as a poacher because the state demands it; he must participate in order to support his family. As they converse, Tierney learns that the supposed grace year girl curse is actually smallpox, and that the girls become mentally unstable because the well water is poisoned by hemlock silt.

As spring arrives, Tierney falls in love with Ryker. When the two kiss, they are caught by Ryker’s friend Anders, who is another poacher. Though Anders agrees to keep their secret, he comes back while Ryker is away to threaten Tierney. Tierney has no choice but to return to the grace year camp. However, before she goes, she and Ryker make love.

Back at the camp, the girls can barely remember Tierney. As summer arrives, Tierney cares for Gertrude, fetches clean spring water, and even finds a vegetable garden. Slowly, the girls get better. When Tierney realizes someone is following her, she sets a trap and waits. Since she assumed her stalker was Anders, she is surprised to find Hans in her trap. Hans reveals that he has been in love with Tierney since she was a child, and when he heard her making love to Ryker, he decided to kill her. Devastated, Tierney leaves Hans to die.

With Gertrude’s encouragement, Tierney returns to Ryker. The two make love once again, and then decide to run away together. Unfortunately, they are caught by poachers and Ryker is killed. Tierney is pursued by Anders, but makes it back to the grace year camp. At camp, Tierney finally convinces the girls that the magic is a lie. As the girls prepare for their journey home, they clean up the camp and label the well as poisonous for the next grace year girls.

When they return to the county, Tierney reveals that she is pregnant. However, when Michael claims the child as his own, Tierney is permitted to live. Now back at home, her mother takes Tierney into the woods and tell her she has been meeting with the women of the outskirts in order to work towards changing life for women. Tierney realizes these are the meetings she has been dreaming of.

Tierney and Michael eventually grow close, and Tierney believes one day she will love him as he loves her. When Tierney gives birth, she is happy to see the baby is a girl. She is also surprised to see a small red mark beneath the baby’s eye, and realizes that her daughter is the girl from her dreams. Tierney names her daughter Grace, as she believes she is the one who will end the grace year once and for all.

More summaries and resources for teaching or studying The Grace Year.