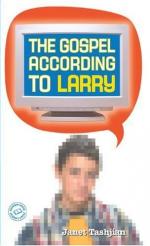 The Gospel According to Larry Summary & Study Guide

Janet Tashjian
This Study Guide consists of approximately 51 pages of chapter summaries, quotes, character analysis, themes, and more - everything you need to sharpen your knowledge of The Gospel According to Larry.

The Gospel According to Larry Summary & Study Guide Description

The Gospel According to Larry Summary & Study Guide includes comprehensive information and analysis to help you understand the book. This study guide contains the following sections:

This detailed literature summary also contains Topics for Discussion and a Free Quiz on The Gospel According to Larry by Janet Tashjian.

THE GOSPEL ACCORDING TO LARRY by Janet Tashjian is the story of a young man who wants to change the world, written as though the author encounters the young man and publishes his manuscript, rather than creating the story herself. Josh creates a website under the pseudonym of Larry, his alter ego, to contribute to the fight against consumerism. When the website becomes popular, Josh's anonymity is compromised, causing his life to turn upside down. THE GOSPEL ACCORDING TO LARRY is an entertaining and informative account of the struggles of a young man whose desire to improve the world is inhibited by the world's consumerism.

In A Note To The Reader, Janet Tashjian is approached by a young man who seems familiar and asks for help publishing his manuscript. After reading the manuscript, she realizes why Josh seems so familiar, and she agrees to help him publish his manuscript. In Part 1, Josh agrees to help Beth, his best friend with whom he is in love, form a school study group based on Larry's website about anti-consumerism, which is written by an anonymous author. Josh is bothered by the fact that Beth is dating Todd when she is so committed to her own personal development, and this leads to an argument between the friends. Though they are reconciled, Josh forgets to mention to Beth that he is Larry. In Part 2, Josh explains that he began the website to alleviate his boredom and did so anonymously because his privacy is very important to him. When Bono from U2 discovers Larry's website and releases a song pertaining to anti-consumerism, the popularity of the site increases rapidly. After Larry publishes a sermon about recognizing worthless relationships, Beth breaks up with Todd; like several of his sermons, this sermon focuses on a veiled account of the relationship between Josh and Beth. betagold begins harassing Larry, insisting that he reveal his identity and threatening to discover it regardless of his agreement, and this worries Josh who fears being discovered to be Larry. With the increased popularity of Larry's website, the Larry study group at Josh's school focuses on preserving Larry's message in the midst of the consumerism beginning to surround his website, so Josh and Beth post flyers promoting anti-consumerism throughout the mall. After this venture, Josh leaves to spend three days in the isolation of nature where he enjoys himself immensely and wonders whether he could become a hermit and reject culture.

When Josh returns from his nature excursion in Part 3, he learns that Bono has planned a music festival called Larryfest. Josh is excited, though betagold continues to threaten to find and reveal his true identity. Josh enjoys himself at Larryfest, and his relationship with Beth seems to take a more romantic turn, nearly causing him to confess that he is Larry. When an older lady drops her toothbrush, Josh offers to give her his own. Returning home from the festival, Larry continues to receive threats from betagold, but Josh will not relinquish his alter ego because he has not completed his work yet. Beth visits Josh, and as they flirt, he nearly tells her that he is Larry; however, he kisses her instead, and when she tells him that she has reconciled with Todd, Josh gets angry and kicks her out of his house. He also argues with Peter, feeling betrayed by the two people to whom he is closest. A knock on the door reveals the older woman with the toothbrush from Larryfest, and Josh is very confused when she introduces herself as betagold, insists he is Larry and invites the media to witness the scene. In Part 4, the discovery that Josh is Larry changes Josh's life forever. The media does not care about Larry's message, and the increased traffic is too much for his website to handle, forcing him to shut it down. Peter is angry at Josh since the situation causes him to lose many important customers, and Beth insists that she can no longer be friends with Josh since friendship is based on honesty and he has been living a lie. Depressed, Josh hates that Larry has become a product, and when he communicates with Mom, she seems to suggest suicide. Though Josh cannot kill himself, he comes across the word pseudocide in an online dictionary and begins to play with the idea of faking his own suicide.

Josh spends six weeks planning his pseudocide in Part 5, though he does not actually intend to follow through with the plan. He spends three days on a vision quest when he realizes that he is considering the crazy scheme, during which he decides to attempt the act. Josh parks his bike on Sagamore Bridge, throws his clothes in the river and dons his disguise as Gil Jackson. Gil Jackson reports seeing a young man matching Josh's description jump from the bridge before vanishing himself. Josh watches the news reports to ensure no one suspects he is still alive. He is saddened by Peter and Beth's grief as he watches his memorial service, but he comforts himself with the idea of returning in several months after the media frenzy surrounding Larry dies down; unfortunately, fatherhood accusations and conspiracy theories about Josh/Larry force him to realize he can never return to his normal life. After wandering around the country for a while, Josh decides to share his side of the story, so he writes his manuscript and searches for an author to help him publish it. In the Epilogue, Janet Tashjian explains she helped Josh because it was the right thing to do, though she disapproves of his pseudocide. Her life is greatly affected by Larry's teachings, and when her son asks about Larry, she explains that he is a boy she once met who wanted to change the world more than anything.

More summaries and resources for teaching or studying The Gospel According to Larry.

The Gospel According to Larry from BookRags. (c)2022 BookRags, Inc. All rights reserved.