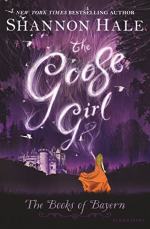 Hale, Shannon
This Study Guide consists of approximately 77 pages of chapter summaries, quotes, character analysis, themes, and more - everything you need to sharpen your knowledge of The Goose Girl.

This detailed literature summary also contains Quotes and a Free Quiz on The Goose Girl (Books of Bayern) by Hale, Shannon.

The following version of this book was used to create this lesson plan: Hale, Shannon. Goose Girl. Bloomsbury. 2003. Reprinted Paperback (2017).

Princess Anidori-Kiladra, or Ani, is born in the kingdom of Kildenree where she develops a strong relationship with her aunt who treats Ani like her own daughter. As Ani grows up, she learns of three important gifts; people-speaking, animal-speaking, and nature-speaking. While she does not know which gift she has, her aunt teaches her how to converse with many types of birds and horses. When her aunt leaves for her home in the wild, however, Ani’s mother, the queen, forbids Ani from being near any animal as she and the rest of Kildenree are terrified of animal-speakers. While Ani is depressed at not being able to use her gift, she resolves to please her mother.

Ten years later just before Ani’s sixteenth birthday, she is still struggling with her confidence as both Crown Princess and a future queen. Although she finds comfort in her father who supports her, she loses that bond when he dies in a riding accident. At the funeral, her mother, the queen, announces that the second born child Calib, and not Ani, will become the next ruler of Kildenree. When Ani confronts her mother about this, Ani learns that she has been promised to the firstborn son of the King of Bayern, even though a royal marriage like that should have gone to the second-born daughter. Furious and disappointed, Ani agrees to go because she knows she has no choice.

Although angry at the queen’s decision, Ani’s lady-in-waiting and best friend Selia warms up to the idea of going to Bayern. On the day of the departure, Ani’s mother wishes Ani a safe journey and gives her a handkerchief with three drops of her own blood on it. The queen promises that her blood will protect Ani and sends the party on its way. As they head into the forest after many weeks of travel, Ani begins to feel alienated by both Selia and the rest of the group. This becomes even worse after she heads the warning of her horse Falada, who she can speak to telepathically, to warn the camp of rabid wolves. She finds comfort in the leader of the group, Talone, who promises his life to her service. However, after Ani catches Selia trying on one of Ani’s dresses, Selia announces that she deserves to be queen more than Ani and will no longer be Ani’s lady-in-waiting. Weeks later, as they are just a few days out of Bayern, Ani loses her handkerchief just moments before Selia and most of the party declare Selia as the new princess and attempt to kill Ani so that Selia can take her name and her crown. Ani, unable to find Falada, grabs another horse and runs before the mutinous guards can kill her.

After being tossed off her horse and forced to wander the forest alone, Ani eventually stumbles on the house of Gilsa and her son Finn. Gilsa, who does not want to know Ani’s problems, tells Ani she can go with Finn to Bayern on when the market opens in eight days. Ani agrees and helps in the house while perfecting her Bayern accent. Eventually, she and Finn head to the market where they ride with a family who knows Finn and follows the rest of the wagons inside. Once there, Ani decides to try and speak to the king. However, after standing in line for hours and preparing to tell him the truth, she sees Selia and falters. She ends up telling the king that she is new to the city and has nowhere to go. He assigns her as his new goose girl and, after Ani fails to meet the prime minister that would recognize her, she is sent off to the pastures.

Ani meets Ideca who assigns her a small room between all the other workers. After telling Finn that she will not be going home with him, Ani returns to the hall and meets the other workers. They tease the goose boy Conrad who is unhappy to have help. At first, Ani struggles to connect with the other workers as well as the geese. However, this changes when she meets Enna, a forest-born who works with chickens, and Jok, an injured goose that she nurses back to health. Over time, Ani builds friendships with the workers by telling stories that her aunt used to tell her. She also meets a man named Geric who says he is the prince’s guard and the two fall in love. She learns through him that her beloved horse Falada has gone mad. Ani tries to speak to him, but Falada does not respond and she knows he is beyond saving. Eventually, Enna learns of her real identity and promises to help. However, when Ani plans to tell Geric the truth, she learns that Falada is going to be killed. Ani tries to save her horse one more time but is almost caught by Ungolad. The next day, she receives a letter from Geric who tells her he will not see her again as he cannot love her the way he wants to. She learns that Falada has been killed. She asks the butcher for a proper burial and is horrified to see Falada’s head hanging on the wall the next day.

During the Wintermoon celebration, Ani sees Selia with the royal family and realizes that the young prince is not someone she would have fallen in love with. However, she is captured by one of Selia’s guards Yulan who plans to take her to Selia. However, with the help of some pigeons and Enna, Ani is saved by the peacekeepers and returns home. Ani then learns from Enna that Kildanree is planning on attacking Bayern so the king has decided to attack Kildenree first. Ani realizes in horror that this is Selia’s plan, as Bayern will wipe out Kildanree and there will be no one who can prove her real identity. She considers returning to Kildanree but knows she has to wait until spring.

However, Conrad has become more hostile toward Ani, as he is jealous that she is better with the geese than him. Things get worse when he sees her hair and realizes she is the yellow girl that Selia’s guards are looking for. He tries to tell the workers the truth, but Enna lies for Ani and convinces the workers to believe Ani. Conrad tries numerous times to take a strand of Ani’s hair, but fails. Meanwhile, Ani learns that she can hear the words of the wind and realizes that her ability to listen to Falada’s voice while he was alive allowed her to hear the quiet voice of the wind around her.

One day, a group of thieves attacks the geese flock. Ani asks the wind for help and it responds by picking up a large amount of dirt and attacking the thieves. The geese follow the wind’s lead and scares the men away. Ani is hailed as a hero by the workers but is horrified to learn that the king wants to honor whoever saved the geese. She sends Conrad in her place and goes to bed. However, she wakes up when Ungolad enters her room. Jok and his mate help her escape, but Ungolad chases after her long enough to cut her back with his dagger. She uses the wind to knock him away long enough to escape into the forest but passes out once she is safe.

Ani travels for four days slipping in and out of consciousness as she tries to remember the directions Finn gave her last time they spoke. Eventually, she finds Gilsa’s house where she is able to recover. A few days later, she finds Talone alive and working for one of Gilsa’s neighbors. The two decide that they cannot return to Kildanree and must try and convince the king of Ani’s true identity. With Finn by their side, they ride to the workers in Bayern who immediately decide to help Ani. After confirming identity with some of the king’s guards, Ani learns that the royal family has gone to the lake for the prince and princess’ marriage. Ani is then introduced to the old prime minister who writes a letter to the stable-master so she can get as many horses as is needed. After retrieving a dress from Selia’s closet where Talone kills a guard named Ishta, they gather their horses and leave Bayern.

Once they reach the lake estate, Ani introduces herself as her sister but is dragged in by herself to Selia’s room. Before Ungolad can knock Ani out, the king’s guard calls them all to the throne room. There, Ani tells them that she is the real princess and that Selia was her lady-in-waiting. Selia claims that Ani was the servant that ran away and convinces the king that Ani is lying. After Selia comes up with a brutal and fake punishment for treason, Geric convinces the king to leave Ani with her countrymen so that she might be convinced to tell the truth. They ignore Ani as she begs them not to leave her with murderers.

Once the king and the guard leave, Selia announces that she has won and kisses Ungolad. She tells Ani to lie for her in exchange for Ani’s life, but Ani refuses. As Selia plans to have Ungolad cut her so they can pretend Ani attacked her and kill Ani instead, the king, Geric, and the king’s guard enter through a secret passage behind the tapestry. Ani uses the wind to escape from Ungolad as the Kildenree men and Bayern guards attack each other. Talone arrives and saves Ani from Ungolad as Geric gets her away from the fighting. He ends up challenging Ungolad himself and, with Ani’s help, kills him. The workers arrive and realize that Selia has gotten away. However, after Ani asks the king to give the workers javelins and shields so they can earn respect in the city, Conrad returns through the secret passage dragging Selia.

After the battle, Ani is called into the conference room where the prime minister and the king demand that she prove that there is no war. Ani angrily berates them by proving that she knows more about their own city than they do, so she would surely know more about the peaceful Kildenree. She then declares that she is their proof as a mother would never send her first born into an enemy camp before storming out. Geric later finds her and praises her for ending the war before it started. After the two decide to get married, he takes her to a celebration where she is introduced as the official crown princess and all of the workers are given javelins and shields. As the partying continues late into the night, the narrator tells the reader that Ani and Geric will one day marry, the forest-born will hold javelins and shields with the city-born, and one day after Falada receives the burial Ani wants, Ani might just hear the name of a newborn colt.

More summaries and resources for teaching or studying The Goose Girl (Books of Bayern).