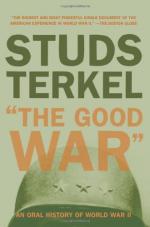 Plot Summary
+Chapters Summary and Analysis
Introduction, A Sunday Morning, and A Chance Encounter
Tales of the Pacific and The Good Reuben James
Rosie, Neighborhood Boys, and Reflections on Machismo
High Rank and The Bombers and the Bombed
Growing Up: Here and There, D-Day and All That, and Boogie Woogie Bugle Boy
Sudden Money and The Big Panjandrum
Flying High and Up Front with Pen, Camera, and Mike
Crime and Punishment, A Turning Point, and Chilly Winds.
Is You Is Or Is You Ain't My Baby, Remembrance of Things Past, and Epilogue: Boom Babies and Other New People
Free Quiz
Characters
Objects/Places
Themes
Style
Quotes
Topics for Discussion
Order our The Good War: An Oral History of World War Two Study Guide

Studs Terkel
This Study Guide consists of approximately 36 pages of chapter summaries, quotes, character analysis, themes, and more - everything you need to sharpen your knowledge of The Good War.

This detailed literature summary also contains Topics for Discussion and a Free Quiz on The Good War: An Oral History of World War Two by Studs Terkel.

The Good War: An Oral History of World War Two by Studs Terkel, is one of the most memorable, comprehensive records of personal stories of World War II in literature. The book is a collection of interviews done by Terkel following World War Two. Terkel takes readers on a journey from the first bombings of Pearl Harbor to the excitement of war to the horrors of concentration camps to the dropping of the A-bomb.

The stories range from the humorous exploits of young GI men to the adoring memories of young women attracted to young soldiers to the horrifying accounts of men coerced by their government to assist with tests of deadly bombs. Terkel does not interject his own opinions, but simply allows those interviewed to tell their stories. Terkel then combines these accounts into subjects, so that each topic is covered from a variety of different angles and viewpoints. In this way, Terkel allows the reader to make his or her own conclusions as to the merits of World War Two. The interviews begin with personal accounts of the attack on Pearl Harbor and stories of young men and women as they experienced the beginnings of the war as soldiers, entertainers, pilots, women workers, and boys too young to fight. In the next book, Terkel interviews those high in political command, pilots, journalists, and entertainers to examine their role in the war. In book three, Terkel examines the benefits of World War II including the financial gains and examines the political sides as the war continued to be fought. It also examines the war from the pilot point of view and from the view of journalists on the front lines. Book four examines criminal aspects of World War II, the dropping of the bombs on Hiroshima and Nagasaki, the horrific effects of the bomb, and the generations that followed those of the soldiers in World War II. Throughout the novel, Terkel guides the interviews with occasional questions but allows each individual to tell their stories in full. He includes information about when each person shows emotion such as anger or sadness, which helps to convey the raw emotion of the recounts of war.

World War Two was a unique time in the world, when the United States in particular was coming out of a Great Depression into a time of great wealth, innocence, and happiness. Men and women, in general, were willing and ready to join the fight to win the war. However, as the war continued, more men and women began to question the propaganda of the United States government and the methods used to win the war. With the dropping of the bomb, many began to outwardly question the choices of the government. Terkel, in his organization of interviews, presents a view of the war that ranges from positive to horrific but consistently tells personal stories full of a hope and sadness common to all mankind.

More summaries and resources for teaching or studying The Good War: An Oral History of World War Two.