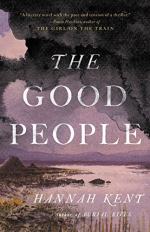 Hannah Kent
This Study Guide consists of approximately 58 pages of chapter summaries, quotes, character analysis, themes, and more - everything you need to sharpen your knowledge of The Good People.

This detailed literature summary also contains Quotes and a Free Quiz on The Good People by Hannah Kent.

The following version of this book was used to create the guide: Kent, Hannah. The Good People. Little, Brown and Company, 2016.

One October day, Peter O’Connor and John O’Donoghue brought Nóra Leahy the corpse of her husband, Martin, who died suddenly and unexpectedly from an unknown cause. Devastated, her reaction was to hand over her grandson, Micheál Kelliher, to Peter O’Connor to bring to her neighbor, Peg O’Shea’s, house. Micheál had a mysterious illness that rendered his muscles taut, his legs paralyzed, and his cognitive abilities impaired. Many people from the valley attended Martin’s wake held at their cabin for three days, sharing drinks and stories of bad omens. On the first night, Nance Roche offered Nóra a keening for Martin, which Nóra accepted. After Martin’s funeral, Nóra returned home to Peg and Brigid caring for Micheál, and Peg shared stories about Nance and how she was accepted into the valley community as a spiritual healer by their former priest, Fr. O’Reilly.

Nóra knew she needed help caring for Micheál, so she hired Mary Clifford at the Killarney fair. Mary was frightened by Micheál’s condition, but was forced to stay because of her financial situation at home. Meanwhile, Peter warned Nance about Fr. Healy’s preaching against her. He also discussed his concern for Martin’s death, suggesting she visit Micheál. When Mary visited the well alone for the first time, Kate accused Micheál of being a fairy changeling. Mary insisted that Nóra find help for Micheál.

Fr. Healy visited Nance’s cabin to confront her about her keening, accusing her of selling dishonesty for the sake of something in return. Daniel also visited Nance with concern about his pregnant wife, Brigid, and she prescribed bittersweet for her sleepwalking. When Nóra visited Fr. Healy to seek help for Micheál, he did not respect her traditional beliefs and admitted to dedicating himself to ridding the valley of paganism and folklore. Feeling helpless, Nóra gathered nettle leaves to recreate a remedy that Nance once suggested for Martin. She stung Micheál’s legs with them, but when she failed to inspire movement, she beat him with them violently. Mary ran to Peg for help, and while she was out collecting dock leaves to ease Micheál’s pain, she fell and twisted her ankle. Nance found her, nursed her ankle, and walked with her to Nóra’s cabin where she diagnosed Micheál as either harmed by the fairies or completely replaced by Them.

The women of the valley had opposing views about the difficult winter fraught with death and poor-quality products, like butter. Some blamed Nance, especially Kate, who revealed off-handedly that her husband had been physically abusing her. Nance remembered her aunt, Maggie, who taught her spiritual healing, and how she did not believe in casting curses. Then, she remembered when Kate, beaten and afraid, threatened Nance to cast a fatal curse on her abusive husband.

Nóra and Mary brought Micheál and a bunch of mint to Nance’s cabin, where she spooned the pulpy, liquefied mint mixture into Micheál’s ears and rubbed the soles of his feet with selfheal. Nóra was disappointed to find Micheál unchanged the next morning and sent Mary to inform Nance, but when she arrived at the cabin, Daniel called upon Nance for help with Brigid’s labor. Brigid’s female relatives by marriage were called upon to help, but despite their rituals and efforts, Brigid’s baby was stillborn. The women gossiped about Brigid’s incapability to protect her unborn baby until Kate accused Nance of killing Brigid’s baby on purpose to create healing opportunities for herself. Mary and a drunken Nóra went back to Nance’s cabin with Micheál, and Nance explained that the previous treatment proved Micheál was full changeling. She used the foxglove cure by bathing him in water steeped in it and dropping the flower’s liquid into his mouth.

Fr. Healy visited Nance again to accuse her of killing Brigid’s baby and casting curses on people of the valley, threatening to evict her. Áine visited her as well, and Nance prescribed her a fertility tea. Seán, in accused Nance of changing Micheál to deliberately bring misfortune to the valley. Not long after, Áine was badly burnt by her hearth fire, and despite the common accident and Nance’s quick response, Fr. Healy and Seán forcibly removed her from the cabin. Nóra decided to continue working with Nance when Micheál showed little improvement, and Nance suggested that the two women meet her with the child for the next three dawns to cast the fairy out at the water of three intersecting rivers. The first morning, Mary entered the river with Micheál and dunked him under three times. Later that day, Mary investigated a curse cast on Seán, who many blame on Nance. The next two mornings, Mary reluctantly participates in the ritual. On the final morning, Nance holds Micheál beneath the water’s surface until he was unconscious.

Mary ran to Peg for help, and when Fr. Healy heard the news, he sent for police officials. The two women and the girl were arrested and held in Killarney, where Fr. Healy brought news to Mary of an offer to be their chief witness. After three months in jail, Nóra and Nance were brought to the Tralee courthouse for their murder trial. The jury found them not guilty on account of their superstition, claiming the murder was not intentional in the traditional, incriminating sense. When they both arrived back in the valley, Nóra was heartbroken to finally discover that Micheál, her actual grandson, would not be returned to her, and was forced to move in with Brigid and Daniel. The valley hardened their hearts to Nance and burnt her cabin down when Seán blamed her for Kate’s disappearance. Peter took Nance in and proposed marriage to her so she could stay in the valley, but she refused, walking back into the natural world.

More summaries and resources for teaching or studying The Good People.