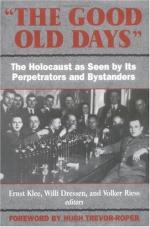 'the Good Old Days': The Holocaust as Seen by Its Perpetrators and Bystanders Summary & Study Guide

'the Good Old Days': The Holocaust as Seen by Its Perpetrators and Bystanders Summary & Study Guide Description

'the Good Old Days': The Holocaust as Seen by Its Perpetrators and Bystanders Summary & Study Guide includes comprehensive information and analysis to help you understand the book. This study guide contains the following sections:

This detailed literature summary also contains Topics for Discussion and a Free Quiz on 'the Good Old Days': The Holocaust as Seen by Its Perpetrators and Bystanders by Ernst Klee.

The book presents a mixture of photographs, photographic reproductions of original documents, and transcribed and translated documents. With a few rare exceptions, the editors do not provide editorial comment on the materials presented. The book is divided into two parts and thirteen named chapters. Each chapter is further divided into numbered and named sections, and sections may in turn contain documents from several sources. Each document is carefully cited in an appendix. Much of the material is derived from post-War legal proceedings and depositions, but much of it is also drawn from wartime reports, letters, diaries, and so forth. The organization of the book presupposes that readers will be familiar with the basic history of the holocaust but does not require in depth knowledge of particular events.

For the most part, the materials presented are related in the first-person point of view and most of the materials are eyewitness accounts of Nazi atrocities directly relating to the holocaust. Many of the documents are official wartime reports from high-ranking officers or politicians, but so too many of the documents represent the point of view of average soldiers or civilians. The text conclusively demonstrates that a wide section of German civilians knew about the holocaust as it was occurring, and many actively participated in promoting some aspect of the holocaust. Several writers enjoy recent promotions or pay raises available only because they became active participants in some aspect of institutionalized mass murder. Very few writers, however, directly implicate themselves in any criminal activity. Thus, it appears that virtually everybody in Nazi Germany and her occupied territories was an accidental witness to extended atrocities, but yet virtually nobody actually performed atrocities. The book also conclusively demonstrates that there was little to no negative repercussions to those Germans—even wartime enlisted men—who refused to participate in mass murder.

What emerges from the book overall is the chilling realization that Nazi Germany, during World War II, was populated with knowing collaborators in the murder of millions of Jews. While not every citizen committed murder, there was surprisingly little resistance to a State-operated machine of genocide; many, in fact, implicitly supported the operation because they hated Jews or because they financially benefitted from the holocaust. The book also includes biographical notes of nearly every author or speaker. These notes help put the included texts in context and form a valuable portion of the book.