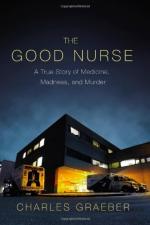 Charles Graeber
This Study Guide consists of approximately 28 pages of chapter summaries, quotes, character analysis, themes, and more - everything you need to sharpen your knowledge of The Good Nurse.

Over a sixteen year career, Charles Cullen had racked up four police investigations, two lie detector tests, and many suicide attempts. However, he was still considered a good hire because he was always on time, he was neat and clean, and had experience in intensive care, critical care, cardiac care, ventilation and burns. His latest job was at Somerset Medical Center in New Jersey.

An unwanted pregnancy, Charlie grew up in a house full of women. He was the only male in his nursing class, which suited him fine. Charlie paid for school working at fast food restaurants. It was here that he met his future wife, Adrianne. He married her shortly before beginning his first nursing job.

More summaries and resources for teaching or studying The Good Nurse.