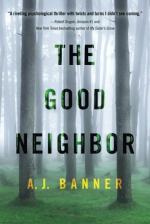 A. J. Banner
This Study Guide consists of approximately 38 pages of chapter summaries, quotes, character analysis, themes, and more - everything you need to sharpen your knowledge of The Good Neighbor.

This detailed literature summary also contains Quotes and a Free Quiz on The Good Neighbor by A. J. Banner.

The following version of this book was used to create this study guide: Banner, A. J. The Good Neighbor. Lake Union Publishing, 2015.

The Good Neighbor is a psychological thriller by A. J. Banner in which Sarah Phoenix attempts to return to life as normal after a fire destroys everything certain in her life. When the novel begins, Sarah has been happily married to Johnny McDonald, a dermatologist, for three years. Sarah herself is a famous children’s book author, of the Miracle Mouse series. Sarah and Johnny live in a lovely home on Sitka Lane, and are surrounded by good neighbors, including French immigrant Monique, her American husband, Chad, and their four-year-old daughter, Mia, next door; the Ramirezes, including their 17-year-old daughter, Jessie; the Frenkels, including their twin high school seniors, Lukas and Lenny; and the Calassises, including elderly Felix who suffers from slight Alzheimer’s. One house on the block is up for sale, under real estate agent Eris Coghlan.

When Johnny is away for a conference in San Francisco, Sarah is awakened one night to see Chad and Monique’s house on fire. The fire kills them, but Sarah manages to save Mia, who goes to live with her grandmother, Harriet, nearby. Sarah then realizes her own house is on fire, and is injured because of the blaze. Johnny rushes home to be by her side. They later learn from Fire Marshal Ryan Greene that the fires were both deliberately set. Sarah is stunned. She and Johnny move over to Shadow Bluff Lane, overlooking the Shadow River, and rent a cottage owned by Eris. Eris welcomes them to the neighborhood, and introduces them at dinner to the Minkowskis, including gorgeous Theresa and her husband.

Sarah, thoroughly unnerved by the fire, begins to notice strange behavior in her husband – taking calls in private, visiting Theresa’s house without telling Sarah, and barely kissing her goodbye before work. When Sarah finds old photographs of Johnny with past girlfriends in the rubble of their home, she is unnerved, knowing so little about Johnny’s past. When she confronts him about these things, Johnny denies an affair, and says his past is the past. He is now only committed to Sarah. Sarah later learns through Jessie – who had a crush on Chad, kissed him once, and wanted to run away with him though he did not return her feelings – that Monique and Johnny were in a sexual relationship by way of Monique’s journal, which Jessie stole to find out if Chad was going to leave Monique.

Sarah confronts Johnny about Monique, but he tells her things with Monique happened long ago, and ended as things with Sarah were beginning. At the same time, Sarah attempts to talk Jessie out of an abusive relationship while babysitting Mia while Harriet is in the hospital for some tests. When Jessie has a fight with her boyfriend, Sarah asks Eris to watch Mia while she goes out to bring Jessie to safety. Back at the cottage, Sarah discovers Mia and Eris are gone. Sarah goes to Eris’s house to see if they have gone there, but the house is empty. Instead, Sarah finds a room that has been turned into a shrine for Johnny, for Eris is obsessed with Johnny. Sarah manages to find Eris down at the river, where Eris confirms she had her drug-addicted handyman set the fire, but that he first burned the wrong house before getting the right house. Eris confirms she wants to be with Johnny, then throws Mia into the river.

Sarah rushes in after Mia, and she and Mia are pulled to safety by Johnny and Ryan. Eris is arrested. Sarah and Johnny pack up and take a house on the shore, miles away from their old neighborhood. Shortly after arriving, Sarah receives a DNA test in the mail. Having doubted the parentage of Mia, Sarah learns that there is a more than 99-percent chance that Mia is Johnny’s daughter. Sarah does not know how the future with Johnny will go.

More summaries and resources for teaching or studying The Good Neighbor.