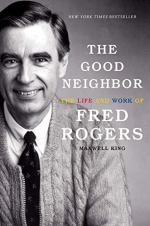 The Good Neighbor: The Life and Work of Fred Rogers Summary & Study Guide

Maxwell King
This Study Guide consists of approximately 67 pages of chapter summaries, quotes, character analysis, themes, and more - everything you need to sharpen your knowledge of The Good Neighbor.

The Good Neighbor: The Life and Work of Fred Rogers Summary & Study Guide includes comprehensive information and analysis to help you understand the book. This study guide contains the following sections:

This detailed literature summary also contains Topics for Discussion on The Good Neighbor: The Life and Work of Fred Rogers by Maxwell King.

The following version of this book was used to create this study guide: King, Maxwell. The Good Neighbor: The Life and Work of Fred Rogers. Abrams Press, 2018. First Edition. The book covers how Fred Rogers drew on childhood experiences, spirituality, and scientific research to create his unique style of television programming for children. In keeping with the general style of the narrative, this analysis refers to Rogers by his first name, Fred.

In a brief prologue, author King offers an anecdote illustrating how focused Fred could be on the experiences of children, and then summarizes some of the different experiences and perspectives Fred layered into his work, which he believed was his calling. That calling is defined, in the prologue and throughout the book, as Fred’s belief in using the medium of television to teach as many children as possible about important aspects of being a compassionate, caring, responsible person, one that felt loved and valued just as they were.

As the narrative itself begins, King focuses on influential aspects of Fred’s childhood and early years – his family’s wealth and charitable generosity, his mother’s attentiveness (which could sometimes become over-protectiveness), his father’s attention, and his own tendency towards self-reliance. There were also, King suggests, instances in which Fred felt bullied and judged because of his family and because of aspects of his personal identity – he was overweight, non-athletic, imaginative, and often solitary. The author also describes ways in which Fred simultaneously kept himself entertained and released his often complicated feelings – through the creation of puppet shows in his attic play space, and through the playing of music. As the narrative unfolds, King offers insight into how all these experiences contributed to the development of Fred’s television persona, the content of his programming, and the lessons he offered the children and parents in his audience.

The narrative continues with descriptions of Fred’s experiences in college; the development of his relationship with Joanne Byrd, a pianist who eventually became his wife; and the early stages of his television career. Those early stages, King suggests, came about as a result of employment at a television station in Pittsburgh, near where Fred’s wealthy family lived, and later in Canada, where Fred created a children’s television program that was the testing ground for many techniques and practices that were later integrated into “Mister Rogers’s Neighborhood.”

The main body of the narrative consists of a frequently detailed examination of the work that went into creating the “Neighborhood” – how it came to be funded, how it came to be defined by scientific principles as much as by Fred’s spirituality and history, and how it came to involve contributions from musicians, actors, and writers who stayed with Fred and the program for years. There are also comments on the contributions made by guests on the program, ranging from famous musicians like Wynton Marsalis and Yo-Yo Ma to a young man with cerebral palsy who was in a wheelchair. There are descriptions of individual episodes, of extended story-lines that played out over a sequence of episodes, and careful breakdowns of the reasoning and practices that went into creating the program on a daily and weekly basis.

The final third of the book focuses on particular aspects of Fred’s personal life, including habits he associated with being healthy intellectually, spiritually, and physically; his relationships with his maturing sons; and his occasional encounters with self-doubt. There are also descriptions of how he came to realize it was time to end the program; of his last few months of life following a diagnosis of stomach cancer; and how his legacy continues to influence contemporary television programming.

The narrative concludes with an epilogue, the only piece of first-person narration in the book. Author King describes some of his own encounters with Fred, how King came to be involved in the writing of Fred’s biography, and his own beliefs about why Fred and his influence were important, and should remain so.

More summaries and resources for teaching or studying The Good Neighbor: The Life and Work of Fred Rogers.

The Good Neighbor: The Life and Work of Fred Rogers from BookRags. (c)2022 BookRags, Inc. All rights reserved.