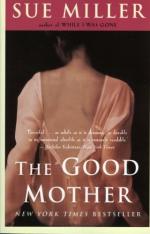 Sue Miller
This Study Guide consists of approximately 56 pages of chapter summaries, quotes, character analysis, themes, and more - everything you need to sharpen your knowledge of The Good Mother.

This detailed literature summary also contains Topics for Discussion on The Good Mother by Sue Miller.

The Good Mother is a book about a woman, Anna Dunlap, torn between her role as a mother to four-year-old Molly and her emerging role as a lover to the exciting artist Leo Cutter, whom she meets at a laundromat one day not long after her divorce from the staid and frigid Brian. The balance between these roles that Anna negotiates is ultimately an unstable one, and the unconventional world which attracts her to Leo eventually clashes with the conventions of her lawyer ex-husband, resulting in Anna's loss of custody over her daughter.

As Anna's relationship with Leo develops, a new world of sexual liberation opens up for Anna, and her new passion changes her parenting style as she seeks to create a freer and more relaxed atmosphere for herself, her daughter, and her lover. When Molly's Oedipal feelings and anatomical curiosity lead her to ask Leo if she can touch his penis, Leo's attempt to follow Anna's free parenting style prompt him to allow the child to do so. The consequences of this moment of inappropriate sexual contact reverberate far beyond what either Leo, Molly, or Anna could have anticipated. Brian files for full custody of his daughter after he learns of what happened and when the legal process distorts beyond recognition the relations that existed between Molly, Leo, and Anna, Anna comes out looking like an irresponsible parent unfit to mother Molly. After Anna loses custody of her daughter, she gives up Leo and moves from Boston to Washington to be closer to Molly. She maintains phone communication with Leo until he realizes that she will never return to him and asks her to stop calling. The novel ends with Anna's move to Boston after Brian and Brenda have informed her that they are relocating back to Boston so that Brenda can work part-time after the birth of their child.

The novel is a poignant portrayal of a bewildered woman's attempt to lay claim to her own identity and to carve out an existence that is mutually gratifying for herself and her daughter. The novel is, ultimately, both uplifting and tragic. Though Anna is able to come into her own as a mother by the end of the novel, she does so only under circumstances of the most painful sort. She must resign herself to a kind of half-life lived in the orbit of a family that is no longer her own. The novel is as much about Anna herself as it is about the dialectic between the public and private domains and the ways that social convention and legal processes can impose themselves on a reality that is far too varied and complex to be justly treated by a system that prefers to understand family relations in terms of safety and danger.

More summaries and resources for teaching or studying The Good Mother.