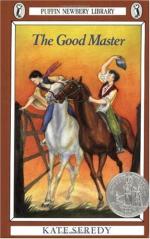 Kate Seredy
This Study Guide consists of approximately 29 pages of chapter summaries, quotes, character analysis, themes, and more - everything you need to sharpen your knowledge of The Good Master.

This detailed literature summary also contains Topics for Discussion and a Free Quiz on The Good Master by Kate Seredy.

In The Good Master, rebellious Kate goes to live with her uncle in the country. Kate adapts to country life, where she learns the value of hard work, as well as compassion and generosity. In the end of the story, her father Sandor comes to live with her on the ranch.

At the novel begins, school-teacher Sandor Nagy sends his incorrigible daughter Kate to stay with his brother Marton, who owns a ranch on the Hungarian plain. Accustomed to the city-comforts of Budapest, Kate initially rebels against her uncle, but soon discovers a fondness for ranch life. Kate's cousin Jancsi teaches her to ride a horse, and the two children build a fast friendship.

Kate spends Easter on the ranch, participating in local holiday traditions. In recognition of her progress, Marton buys Kate a white horse named "Milky." To everyone's surprise, little Kate, caught in great peril, heroically uses Milky to reign in a stampeding herd of cattle. In the following days, Kate meets the shepherds and herdsmen of the ranch, listening to stories selected from their rich oral tradition.

Kate is now proactive, doing chores of her own volition, but she's yet to master common sense. Marton takes everyone to the fair, where Kate causes a scene by publicly debunking one of the sideshows. Some time later, ignoring Jancsi's warnings, Kate swims into the deepest part of the river and is nearly carried away by the current. Jancsi, who cannot swim, bravely rides his horse into the water to rescue his cousin.

In living with her aunt and uncle, Kate has learned about compassion and generosity. When a drought threatens to doom the ranch, Kate and Jancsi each offer Marton their entire month's pay as ranch-hands. He doesn't accept, but he is so moved by the gesture that his morale is greatly improved. Soon after, a storm arrives and stays for several days.

With the harvest comes the gypsies. While Marton is suspicious of their larcenous ways, he is willing to offer work to the nomads in the form of baking bricks and fixing pots. The gypsies perform the work as requested, and Marton negotiates payment. When Marton and Jancsi return from rounding up payment, however, they discover that the gypsies have made off with more livestock than was agreed, and his niece. Luckily Kate soon escapes and is reunited with her uncle.

The Nagys prepare for winter, harvesting grain and canning produce. The shepherds bring in their flocks for the season. Kate takes it upon herself to begin teaching the shepherds to read and write. On the first windy day, Marton and the children take their grain to the windmill, where Kate watches how flour is made. The old miller tells a story about achieving immortality through work, friendship and memory.

On December 6, Mikulas Day, Marton announces that Mikulas, the Hungarian Santa Claus, will be their guest. While initially dubious, the children soon find themselves delivering gifts alongside "Mikulas." When Mikulas runs out of presents, Kate and Jancsi offer up their own. Kate soon realizes that Mikulas is none other than her own father, Sandor, in disguise. She is overjoyed. While initially reluctant, Sandor slowly comes to realize that his place is on the ranch, with his daughter, so he decides to stay and take up a position as the village teacher.

More summaries and resources for teaching or studying The Good Master.