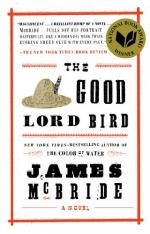 James McBride
This Study Guide consists of approximately 116 pages of chapter summaries, quotes, character analysis, themes, and more - everything you need to sharpen your knowledge of The Good Lord Bird.

This detailed literature summary also contains Quotes and a Free Quiz on The Good Lord Bird by James McBride.

The Good Lord Bird is a historical novel published by journalist, noted memoirist, and author James McBride in 2013. It is his third historical novel, and it was honored with the National Book Award. It is 417 pages long, and follows the experiences of a young African-American boy named Henry Shackleford as he travels with abolitionist John Brown from his enslavement in Kansas to the raid on Harpers Ferry. The novel is fiction, but approaches verisimilitude by framing it as a true and transcribed account by the last living survivor of the raid on Harpers Ferry.

Henry was unwillingly freed from enslavement by John Brown after his father is accidentally killed. He was immediately assumed to be female by John Brown and given girls' clothing to wear. Through most of the novel, most characters assumed that Henry was female, and for his own safety and that of others he continued the charade. The humor of this and other events bring great comic relief to the action of the novel, relieving tragic events like massacres and battles and the realities of slavery. Henry traveled with John Brown's army from Bleeding Kansas and experienced battles between Free State forces and Pro-Slavery forces there.

The second part of the novel depicts Henry's experiences in Missouri, a slave state, where Henry was re-enslaved in a hotel. Here he experienced slavery in all its horror, from treachery, lies and the consequences of insurrection. He came to understand what it means to be a slave and desire freedom for himself.

The third part of the novel depicts Henry's experiences as he went east with John Brown and saw New England and cities for the first time. He met famous black leaders like Frederick Douglass and Harriet Tubman, and found himself a front-row witness to historical events throughout. Finally, he witnessed the famous and ill-fated raid on Harpers Ferry. Throughout the novel, Henry was the favored adopted daughter of the near-mythical John Brown, acting as his good luck charm in what appear to be impossible odds. As a boy pretending to be a girl, he found his true self and the bravery he didn't know he possessed.

More summaries and resources for teaching or studying The Good Lord Bird.