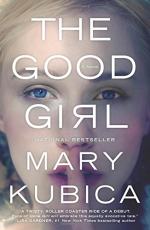 Mary Kubica
This Study Guide consists of approximately 58 pages of chapter summaries, quotes, character analysis, themes, and more - everything you need to sharpen your knowledge of The Good Girl.

This detailed literature summary also contains Quotes and a Free Quiz on The Good Girl by Mary Kubica .

NOTE: This study guide refers to the Kindle Edition of The Good Girl by Mary Kubica

Mia Dennett, the protagonist in Mary Kubica’s The Good Girl, lives on the perimeter of her high-society family. She has less than a warm relationship with her mother and sister and a worse relationship with her father. The latter relationship is so bad that she decides to get even with her father, James, by making him part with what he loves most, his money and his reputation. Her plan is to have a hardened criminal arrange her kidnapping and “hold” her for ransom. Her father would have a choice. If he did not pay the ransom, the kidnapper, a man named Dalmar would let the world know about bribes he took early in his career. In the meantime, Mia would live in an apartment, out of site, until the police “found” her.

Dalmar hires a man, Colin Thatcher, to kidnap Mia and deliver her to him. He does not tell Colin, however, that Mia has planned her own kidnapping. Everything is going as planned until Colin decides to save Mia by not delivering her to Dalmar. He fears the unimaginable things that Dalmar and his men will do to Mia. Once Mia realizes that he is not taking her to Dalmar, she becomes scared. Colin decides to take her to a cabin in Minnesota that belongs to his father to hide out until he can come up with a better solution. It is fall and as the winter comes, he does everything he can to keep the place as warm and functional as possible. He and Mia stay there for 3 months. At first she is afraid of him and thinks that he is going to hurt her. She tries to run away once. He finally tells her the truth, that he bought her there to protect her, but now they have to worry about being caught by Dalmar who he thinks will kill them both if he finds them. He also has to worry about the police finding them and being arrested for kidnapping. While he worries about these things, he also worries about his mother who has Parkinson’s disease. He manages to send her some money and hopes that someone is caring for her in his absence.

During their time in the cabin, Colin and Mia become close. Colin falls in love with her and decides that when he leaves she will come with him. They plan a life together and unbeknownst to both of them, she becomes pregnant.

When a friend/co-worker of Mia’s realizes that she is missing, she calls Mia’s mother who does not take her fears seriously at first. Finally she does and the family calls the police. The sergeant assigns the case to Gabe Hoffman, a modest, honest detective who does not like James. He feels sorry for Eve as soon as he meets her and even though there is some doubt at first that Mia is really missing, he continues to follow up on the case for Eve’s sake.

While Mia is gone, Eve worries about her and awaits her return. She thinks about how she could have been a better mother and wonders whether she will be able to tell Mia how much she loves her.

Gabe finally finds Mia and in rescuing her, the police kill Colin. Mia returns home, but has selective amnesia and cannot remember anything that happened to her while she was with Colin in the cabin and she claims to be Chloe, not Mia. She acts strange in other ways as well. She goes to a psychiatrist and makes a little bit of process, but Gabe is anxious for things to move faster because he knows that Colin did not act alone. He worries about Eve’s and Mia’s safety. During his continued investigation, Mia finds out she is pregnant with Colin’s child. In spite of James’ wish for her to get an abortion, she decides to keep the baby, to Eve’s relief.

Eve leaves James and Mia says that she can stay with her. Gabe and Eve have gotten closer, but Eve tells him that she cannot pursue a relationship with him because she needs to take care of Mia. Gabe finally gets Mia to remember more and discovers that Dalmar was behind the kidnapping and that he was blackmailing James. James never paid the ransom, however, because Dalmar could not prove that he had Mia, as he did not have her. Gabe arrests James and Eve files for divorce. The police have yet to find Dalmar. At the end of the novel, Mia admits that she planned her own kidnapping and explains her motivation - to make James pay for being a bad father.

More summaries and resources for teaching or studying The Good Girl.