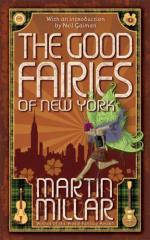 Martin Millar
This Study Guide consists of approximately 33 pages of chapter summaries, quotes, character analysis, themes, and more - everything you need to sharpen your knowledge of The Good Fairies of New York.

This detailed literature summary also contains Topics for Discussion and a Free Quiz on The Good Fairies of New York by Martin Millar.

The Good Fairies of New York is an award winning novel by science fiction writer Martin Millar. This novel is about a group of fairies who, after a night of drinking, find themselves in New York City with no clue how they got there or how to get home. Two of the fairies befriend humans, but their attempts to help their new friends causes tension among the various groups of fairies living in New York, culminating in a street brawl. At the same time, among the other fairies transporter to New York are the young children of the Cornwall king who are the only hope of a group of rebels who disagree with the king's decision to allow Magris, his magician, to turn their peaceful country into an industrial nation. This battle comes to New York, bringing to Central Park a battle between a Cornwall army and the disorganized, disgruntled fairies of New York City. The Good Fairies of New York is a humorous novel that surprises the reader, causing them to root for a group of unlikely heroes and their human counterparts.

Heather and Morag, two thistle fairies originally from Scotland, stumble through the window of Dinnie MacKintosh's room and vomit on the floor. These fairies had a long night of drinking and have somehow found themselves in a strange land. Heather and Morag make themselves visible to unsuspecting Dinnie, hoping to find a safe place to sleep off their hangover in his home. Dinnie is shocked, but when he overcomes this shock he demands the fairies leave. One does, but after fighting with Heather, Morag decides to find some other place to hide out until she can figure out how to return home. This leaves Heather with Dinnie, an unpleasant bike messenger who insists on playing the violin badly. Heather attempts to teach Dinnie how to play better, but Dinnie becomes so frustrated that he refuses to learn anything.

While Heather attempts to help Dinnie, Morag goes across the street and befriends Kerry. Kerry is an artist who suffers from Crohn's Disease. As a result of her disease, Kerry has a temporary colostomy bag that caused her last boyfriend to break up with her. Kerry is so angry with this boyfriend that she has decided to enter a community art contest so that she can win against his presentation of A Midsummer's Night Dream. The only problem is that Kerry has decided to create a Celtic Alphabet, but the centerpiece flower keeps disappearing.

While Heather and Morag settle in with their human companions, their drinking pals are stuck in Central Park. Among these friends are Petal and Tulip, the children of King Tala, the king of Cornwall. King Tala is dealing with a rebellion that rose up against his decision to turn his kingdom into an industrialized nation. The rebels want Petal and Tulip to ascend to the crown, so King Tala has decided they must die. When King Tala learns Petal and Tulip are in New York City, he sends an army to kill them.

One afternoon Heather takes a close look at the violin Dinnie bought at a thrift store. The violin turns out to be an ancient heirloom belonging to the Scotish fairies called the MacPherson Fiddle. Since Heather and Morag were kicked out of Scotland for damaging a precious heirloom, the McLeod Banner, Heather thinks she will be welcomed back to Scotland if she can return the MacPherson Fiddle. Heather makes a pact with Dinnie where he agrees to give her the violin if she can help him win Kerry's love. Heather does as promised, but when it comes time to take possession of the violin, Morag insists that she also had a pact with Dinnie and that the violin should be hers. As a consequence, Morag and Heather have a fight, dropping the fiddle in the street and leaving it to be damaged.

When the army from Cornwall begins to descend on Central Park, Maeve, an Irish fairy, calls her friends to help. At the same time, the McLeod's have sent a group to find Heather and Morag to retrieve the pieces of the McLeod Banner. Finally, the rebels also come to New York in order to find Petal and Tulip, as well as a rare Welsh poppy their leader needs to appease the woman he loves. When all these people arrive in Central Park, they are not enough to battle the large Cornwall army. The New York fairies agree to help, allowing the group to win against the Cornwall army. At the same time, Kerry's illness has worsened, causing her to be hospitalized again. Dinnie remains by her side, unconcerned with her colostomy bag. During this time, Kerry wins the art contest against Cal, thanks in part to a woman Dinnie befriended who happens to be one of the judges. Finally, the visiting fairies help Morag to heal Kerry's illness.

More summaries and resources for teaching or studying The Good Fairies of New York.