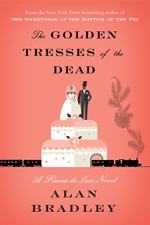 Related Topics
The Sweetness at the Bottom of the Pie: A Flavia De Luce Mystery

Alan Bradley
This Study Guide consists of approximately 51 pages of chapter summaries, quotes, character analysis, themes, and more - everything you need to sharpen your knowledge of The Golden Tresses of the Dead.

The Golden Tresses of the Dead: A Flavia De Luce Novel Summary & Study Guide includes comprehensive information and analysis to help you understand the book. This study guide contains the following sections:

This detailed literature summary also contains Quotes and a Free Quiz on The Golden Tresses of the Dead: A Flavia De Luce Novel by Alan Bradley.

The following version of this book was used to create this study guide: Bradley, Alan. The Golden Tresses of the Dead. Delacorte Press, 2019. Hardback Edition.

As the narrative begins, Flavia de Luce’s sister Ophelia is getting married. Flavia, the narrator, tells readers about the making of Ophelia's wedding cake, her wedding and the events that occur at the reception which includes Ophelia cutting into her wedding cake and finding a finger. Flavia takes the finger before anyone else sees it and analyzes it in her lab. Dogger, her partner in Flavia's newly formed detective agency joins her, and they discern that the finger belongs to a recently deceased guitar player.

Ophelia leaves for her honeymoon and Dogger and Flavia begin their investigation to solve the mystery of the finger in wedding cake. The appearance of their first client, Mrs. Prill, interrupts it, however. She wants them to find some missing letters. No sooner do they begin their investigation than they find Mrs. Prill dead. Now, the detectives have three mysteries to solve. They want to know who put the finger in Ophelia's wedding cake, the location of the missing letters, and the identity of Mrs. Prill’s killer. Their investigation into Mrs. Prill’s affairs leads them to her father, Dr. Brocken, who is in a hospital. Even though he appears to be unresponsive to what is happening around him, Dogger deduces that he is faking his condition. The duo discovers incriminating evidence against him which includes the missing letters in his room that seem to threaten his business, but also threaten Mrs. Prill’s life. Dogger deduces that Dr. Brocken wrote the letters himself. They also discover incriminating evidence against two Missioners who are staying at Flavia's estate as they admit that they stayed at Mrs. Prill’s house and a rat found in the trunk of their car died from ingesting the same type of bean that killed Mrs. Prill. They also talked about bringing in the beans.

Flavia discovers an important clue that ties all of the cases together when she goes to speak to Clary Truelove, a member of the Altar Guild who has a list of the names of people who were at Ophelia's wedding reception. While Flavia is there, Miss Truelove receives a delivery. Miss Truelove also tells Flavia that she is a perfumer. Flavia leaves, but, then returns and breaks into Miss Truelove's pottery shed. There she finds boxes stored with ashes and body parts that belong to the dead. When she tells Dogger what she discovered, they realize that Miss Truelove is involved in body snatching. When they read about a confidence scheme in which people are being sold an elixir that is supposed to give them special abilities, but does not, they realize that Miss Truelove is also connected to Dr. Brocken’s ring and the Missioners. In addition, they realize that she put the fingers in Ophelia's wedding cake as she had it get rid of it quickly after its delivery. When they go to confront Miss Truelove, she tries to commit suicide by eating the same type of beans that killed Miss Prill. Dogger and Flavia save her life.

The duo give Inspector Hewitt the information they have. He thanks them for it, but tells them that will not receive credit for solving the case and they cannot tell anyone how they contributed to it. They accept his conditions. At the end of the narrative, they go to the graveyard to bury the finger.

More summaries and resources for teaching or studying The Golden Tresses of the Dead: A Flavia De Luce Novel.

The Golden Tresses of the Dead: A Flavia De Luce Novel from BookRags. (c)2022 BookRags, Inc. All rights reserved.