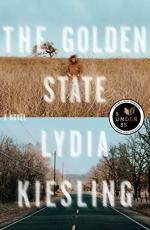 Lydia Kiesling
This Study Guide consists of approximately 44 pages of chapter summaries, quotes, character analysis, themes, and more - everything you need to sharpen your knowledge of The Golden State.

San Francisco is the city where Daphne and Honey live, and the place in which the novel begins. In San Francisco, Daphne works at the university's Institute for the Study of Islamic Societies and Civilizations. After she and Engin were married, they decided to live in the states. They chose San Francisco both because of Daphne's job, and Engin's acute need to live in a large urban center. Though only a minuscule fraction of the narrative takes place in the city, Daphne's thoughts frequently transport the narrative back to San Francisco, Honey's daycare, and her office at the Institute.

The mobile home where Daphne and Honey spend most of their time over the course of the novel, is located in Altavista, Paiute County, and originally belonged to Daphne's grandparents. After they died, they passed it to Daphne's mother, and after her mother died, she...