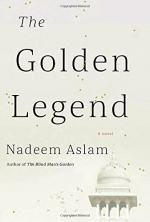 Nadeem Aslam
This Study Guide consists of approximately 36 pages of chapter summaries, quotes, character analysis, themes, and more - everything you need to sharpen your knowledge of The Golden Legend.

Massud’s father’s book symbolizes the necessity of mutual peace and respect between people and cultures. The book is entitled That They Might Know Each Other, and it records and implicitly celebrates exchanges of culture over much of human history. The book also catalogues times in history when much violence and suffering was incurred due to tensions between peoples and cultures.

Imran’s arm symbolizes both the literal and metaphorical scars of violence. When Imran’s mother was nine months pregnant with Imran, she was badly beaten by Indian soldiers, and Imran was thusly born with a broken arm. Imran’s arm never healed fully. Imran’s army thusly bears a thematic parallel with the other instances of violence in the book, all of which inflict physical, emotional, and social scars.

More summaries and resources for teaching or studying The Golden Legend: A Novel.

The Golden Legend: A Novel from BookRags. (c)2023 BookRags, Inc. All rights reserved.