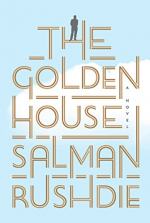 Salman Rushdie
This Study Guide consists of approximately 54 pages of chapter summaries, quotes, character analysis, themes, and more - everything you need to sharpen your knowledge of The Golden House.

The Golden House: A Novel Summary & Study Guide includes comprehensive information and analysis to help you understand the book. This study guide contains the following sections:

This detailed literature summary also contains Quotes and a Free Quiz on The Golden House: A Novel by Salman Rushdie.

The following version of this book was used to create this study guide: Rushdie, Salman. The Golden House. The Random House Group, 2017. First American edition.

The Golden House is told in by a retrospect first-person narrator, René. Throughout the novel, René frequently employs the literary technique called "prolepsis," revealing things which will occur in the novel before they actually occur.

The Golden House tells the story of Nero Golden and his three sons, Petya, Apu and D, and their time in America. In addition, the novel tells the story of René's life and his creation of a film about the Golden family. The novel begins by introducing Nero Golden and his three sons. Petya, the eldest, is extremely intelligent, an alcoholic, and agoraphobic. Apu, the second eldest, is a bohemian who loves American life. D, the youngest, has a different mother than his brothers and struggles with his gender identity. René then introduces himself, saying he wants to make a film about the Golden brothers. The novel then relates how Apu and Petya fight over a woman named Ubah, and how D falls in love with a woman named Riya.

At this point, Vasilia Arsenyeva is introduced: she seduces and marries Nero for his money. After the marriage, D's struggle with his identity worsens, and he seriously begins to consider transitioning from a male to a female. Shortly after, René's parents are killed in a tragic car accident. In order to help René, Nero suggests that he move in with the Goldens, which he does. René begins a relationship with a woman named Suchitra.

While living at the Goldens, Vasilia seduces René, asking him to father her child in secret. René acquiesces, betraying both Nero and Suchitra. Meanwhile, Petya overcomes his agoraphobia, which allows him to take revenge on Apu for sleeping with Ubah. This revenge spurs Apu to visit his home in Bombay. During his time in Bombay, Apu is recognized as the son of Nero, and killed. In this way, Nero's obscure past as a member of the mafia is revealed. Vasilia conceives a child by René.

In the meantime, D's struggle with his identity is increased to the point of trauma. D dresses as a woman, completing her transition, but promptly kills herself. At this point, Vasilia gives birth to her child, whom she names Vespian. Traumatized by the loss of two of his sons, Nero tells Riya his entire past, revealing that he is responsible for the death of his first wife, and by extension, the death of Apu. Nero's confession inspires René to confess how he betrayed Nero by sleeping with his wife; this confession causes Suchitra to leave René.

After sometime apart, René tries to win Suchitra back; he is successful and the lovers reunite. Shortly after, Nero's home is burned down by a fire. Nero and Vasilia are killed in the fire, but Vespian is saved. René and Suchitra assume the care of Vespian, and begin their new lives together.

More summaries and resources for teaching or studying The Golden House: A Novel.

The Golden House: A Novel from BookRags. (c)2022 BookRags, Inc. All rights reserved.