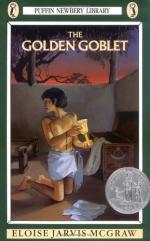 Eloise McGraw
This Study Guide consists of approximately 30 pages of chapter summaries, quotes, character analysis, themes, and more - everything you need to sharpen your knowledge of The Golden Goblet.

This detailed literature summary also contains Topics for Discussion and a Free Quiz on The Golden Goblet by Eloise McGraw.

The Golden Goblet is a novel by Newberry Award runner-up Eloise Jarvis McGraw. This novel follows the life of Ranofer, a young Egyptian boy whose only dream is to become a goldsmith. Unfortunately, after the death of his father, Ranofer has been left in the care of a half-brother who is more concerned with his own future than Ranofer's. At first, Ranofer is allowed to work in a goldsmith shop, but when his usefulness to his brother's gold stealing plan runs out, Ranofer is forced to apprentice in his brother's stonecutter shop. Ranofer is determined to find a way to live on his own and to become a student to Zau the Master Goldsmith, even if it means turning his own brother in for the thief that he is. The Golden Goblet is a young adult novel that not only teaches a lesson about morals, but offers a history lesson that is unmatched by other novels of its kind.

Ranofer is working as a porter in Rekh's goldsmith shop, making ingots and running errands. Ranofer would rather be an apprentice, learning the art of gold, but his half-brother and guardian did not see fit to pay the apprentice fee. However, Ranofer is content to learn by watching and listening to the lessons taught the apprentices in the shop. One day, Ranofer learns that someone working in the shop has been stealing gold. Ranofer's first though is of Ibni, a man who works in the shop and who is a friend of Ranofer's half-brother, Gebu. Ranofer realizes that the wineskins Ibni often gives him to take home to Gebu would be the perfect way to transport small pieces of gold. Gebu refuses to bring home any more wineskins, but when Gebu learns this, he beats Ranofer. Gebu also threatens to throw Ranofer out of his house if he continues to refuse.

Ranofer brings home another wineskin, but he also tells his suspicious to Heqet, an apprentice in Rekh's shop. Ranofer asks Heqet to tell Rekh that Ibni is the thief. Heqet does and nine days later Ibni is fired. Ranofer is happy, because he believes his problems are over. However, that night he learns that Gebu has decided to take him out of the goldsmith shop and make him an apprentice in his own stonecutter shop. Stonecutting is an ugly, hard job and Ranofer is saddened that he will not be able to fulfill his dream of becoming a goldsmith like his father.

Ranofer works hard and keeps to himself most days. However, Ranofer likes to wander the city on his lunch breaks because he has no food and nothing else to do. One day Ranofer runs into Heqet. Heqet suggests that they begin meeting at lunch and after work each day. Ranofer agrees. The two boys eat their lunch by the Nile among the reeds. They are joined by the Ancient, an old man who cuts reed for the shipbuilders. The three of them become good friends and often spend their time talking about their dreams of the future.

Heqet is told by Rekh to go to the shop of Zau the Master one day to retrieve a tool. Heqet asks Ranofer to go along with him. Once there, Ranofer reminds Zau that he once suggested he would like to take Ranofer on as a student. Zau remembers and agrees to take Ranofer on without charging the same fee he charges all his other students. However, Ranofer knows he will never be able to convince Gebu to allow him to leave the stonecutter's shop. Ranofer becomes determined to find a way to live on his own so that he can leave the home of Gebu.

Soon after this, Ranofer becomes aware that Gebu suddenly has more money. Ranofer convinces his friends to help him spy on Gebu and his friends to find out where they are stealing from now. A short time later, Ranofer finds a golden goblet in Gebu's room while he is searching for food. Ranofer soon begins to suspect that Gebu is stealing from tombs. Ranofer follows Gebu and one of his friends into the Valley of the Tombs of the Kings. There, Ranofer follows Gebu into the tomb of the parents of Queen Tiy through a back tunnel Gebu designed for just that purpose. Ranofer traps them into the tomb, leaves his friends to guard the tunnel, and rushes into town for help.

More summaries and resources for teaching or studying The Golden Goblet.