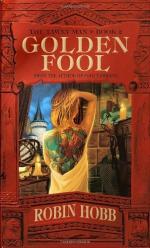 Robin Hobb
This Study Guide consists of approximately 38 pages of chapter summaries, quotes, character analysis, themes, and more - everything you need to sharpen your knowledge of The Golden Fool.

This detailed literature summary also contains Topics for Discussion and a Free Quiz on The Golden Fool by Robin Hobb.

Golden Fool by Robin Hobb centers on Tom Badgerlock, a servant to the royals in Buckkeep Castle. Tom is in disguise; he is actually FitzChivalry Farseer, a royal who is heir to the Farseer throne. Tom has Wit and Skill, two magical powers, and uses them to protect Prince Dutiful and his family.

Tom Badgerlock seems like an ordinary servant at Buckkeep Castle. He serves Lord Golden, an eccentric but kind royal. Tom mourns the death of his pet wolf, Nighteyes. Tom is actually in disguise. He is FitzChivalry Farseer, a royal in line for the Farseer throne. Everyone thinks he is dead, but in actuality, he is in guise as Tom Badgerlock. There are some who know his real identity such as Lord Golden, who is also in disguise. Golden is really a court jester called the Fool. Queen Kettricken and Chade, Tom's old mentor, know that he is Fitz.

The Queen rules over the Farseer kingdom of the Six Duchies. There is a rebel group called the Piebalds. They want power at any cost. They force citizens to join them or citizens face persecution or even execution. The Piebalds know that Tom is really Fitz.

Tom has two magical powers, Skill and Wit. Skill is the ability to talk telepathically with other Skilled Ones and to go outside of oneself. Wit is the ability to sense animals and bond with a beast i.e. the way Tom bonded with Nighteyes, his deceased wolf. If one has either magic, s/he must keep it secret for fear of persecution. Prince Dutiful, the Farseer prince, is Skilled. Tom teaches Dutiful about Skill in lessons. Dutiful is betrothed to the Narcheska, a princess from the Out Islands. Both are not happy about the betrothal, but it is their royal duty. The Queen wants this marriage to represent peace between the Farseers and Outislanders.

The Narcheska says she will not marry Dutiful unless he slays the dragon that betrayed her people and gives her its head. Dutiful agrees and challenges her to join him on this quest. She agrees.

Tom finds out Chade's servant, Thick, has very strong Skill. He is also a spy for the Piebalds, but he is mentally challenged and does not realize what he is doing. Tom kills the Piebalds leader, two other Piebalds and a horse. In the fight, he is stabbed. Poison runs through him. Dutiful, Chade, Thick and Golden form a Skill coterie and use their magical energy to heal Tom. Tom realizes this is the coterie that will protect Dutiful on his dragon quest.

The Queen welcomes all the Skilled and Witted to Buckkeep Castle, which is unprecedented. The citizens of the Six Duchies are excited as springtime arrives because Dutiful will set forth on his dragon quest with the coterie.

More summaries and resources for teaching or studying The Golden Fool.