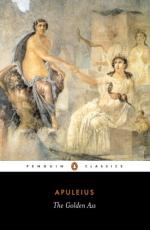 Apuleius
This Study Guide consists of approximately 37 pages of chapter summaries, quotes, character analysis, themes, and more - everything you need to sharpen your knowledge of The Golden Ass.

This detailed literature summary also contains Topics for Discussion and a Free Quiz on The Golden Ass by Apuleius.

Lucius, a Roman traveling through Greece, is accidentally transformed into a donkey when his curiosity causes him to investigate a witch's magic a little too closely. His transformation begins a series of adventures and close calls as he tries to find the one antidote for his condition: rose petals. He is finally succored by the goddess Isis who not only helps him regain his human form but sets him on a path away from his life of gratification and towards one dedicated to virtue.

Lucius' troubles begin when he stays at the house of Milo, a wealthy miser to whom he was recommended by a friend. Milo is married to a powerful witch named Pamphile, whose secrets he convinces Fotis, his lover and Pamphile's maid, to reveal to him. He hopes to transform, perhaps for only a few hours, into a bird, but they take the wrong potion and transform him into a donkey instead. Before the spell can be reversed, bandits break into the house and use Lucius to haul their bounty back to their hideout. He is held there for a few days along with a beautiful young girl named Charite whom the bandits kidnapped for ransom. The two attempt to escape together but their plans are foiled. Execution seems certain but they are saved by Charite's fiance who infiltrates the bandits' lair by posing as a bandit himself. In reward for his attempted bravery, Charite sends Lucius to one of the farms on their estate. He is supposed to live a life of freedom and pleasure, but the workers have other ideas; instead, he is worked constantly and receives only the sparsest comforts.

The farm is abandoned when Charite and her fiance are announced to be dead—the result of treachery by a man who desperately wanted to be with Charite. Lucius is eventually sold to a group of eunuch priests, practitioners, at least apparently, of a mysterious religion from Syria; in reality, they are no better than simple con-men who use their religion to dupe people out of money. Lucius is sold again not long after to work another mill, this one even worse than the first, largely on account of his abusive mistress. The family that owns the mill is destroyed before long, however, when the wife commits adultery and upon being divorced kills her former husband with witchcraft. Lucius is then auctioned off to a kind but poor gardener. His life with the gardener is easy, but his owner gets in trouble with the law and Lucius is acquired by a group of centurions.

After a complex, incestuous drama plays out with his new owner's family, Lucius is sent to work for two kitchen slaves who serve a wealthy and powerful aristocrat. Lucius' taste for human food leads him to being a sensation throughout the surrounding area and his new master plans to make a public spectacle of him. In particular, he wants to have Lucius have sex with a woman scheduled to be executed in front of an enormous audience. Lucius, though, is none too pleased with this prospect and escapes. He winds up dozing on a beach under the moonlight, whereupon he receives a vision from the goddess Isis. She tells him where he will be able to find roses and promises to deliver him from his condition. Lucius obeys her commands and returns to his original form. The bargain struck with the goddess, however, requires Lucius to give up his former life of constant gratification. He dedicates himself to the service of the gods and, at their command, becomes a lawyer.

More summaries and resources for teaching or studying The Golden Ass.