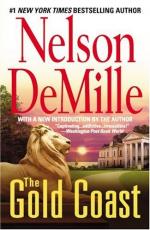 Nelson Demille
This Study Guide consists of approximately 49 pages of chapter summaries, quotes, character analysis, themes, and more - everything you need to sharpen your knowledge of The Gold Coast.

This detailed literature summary also contains Topics for Discussion and a Free Quiz on The Gold Coast by Nelson Demille.

The Gold Coast is a novel detailing the life of John Sutter and his life over approximately one year. Sutter is a resident of the North Shore of Long Island, or what is sometimes known as The Gold Coast, an area where the extremely wealthy have lived for many years. The area is now in a decline for many different reasons. John is married to Susan Stanhope Sutter, the daughter of one of these excessively wealthy families. Sutter is not poor, but does not have the vast fortune that the Stanhope family had at one time. Though the Stanhope's are still wealthy, they no longer have the never ending funds that they once did, and Stanhope Hall, the family estate sits empty, as many of the other great mansions in the area do. One such estate is Alhambra, next door to the Sutter's. Alhambra is purchased by Frank 'the bishop' Bellarosa, a Mafia don and very powerful man. Sutter and Bellarosa meet by chance, or so it appears, and before John realizes exactly what is happening, his entire life is turned upside down, leaving everything and everyone he cares about touched in some way by his relationship with Bellarosa.

John Sutter is originally put off by his new neighbor, caught up in the class structure he had been raised with. A WASP through and through, Sutter looks down on Bellarosa, considering him lower class and uneducated. After a few meetings with the don, Sutter not only changes his mind, but also begins to respect Frank a bit. Frank is not a stupid man at all, and Sutter discovers that if Bellarosa wants something, he will do what it takes to get it. This is no more evident than when Frank wants John to defend him against murder charges. Knowing that Sutter would be unwilling to mix himself up with the case, Frank arranges to have John investigated for tax evasion, and then provides him with the means to solve the problem. By accepting the assistance of the don, John is indebted to him. As such, Sutter defends Bellarosa regarding the murder charge, further entangling him in the life of the Mafia don.

Frank Bellarosa uses the people around him for his own gain, though he admires John Sutter and considers him a friend. In order to gain John Sutter as a defense attorney, Bellarosa is more than happy to cause the tax problems that require John to sell his summer home, losing a small piece of the life that John Sutter still enjoyed. When directly accused of orchestrating the tax audit in order to have Sutter come to him for help, Bellarosa does not deny his actions. Despite this, John Sutter still helps the don, having grown to enjoy the excitement and danger surrounding 'the bishop'.

Throughout the novel John and Susan struggle with their relationship and their lives, neither very happy with where things are or where they are going. Despite this they still love each other, and each suggest at different times that they should escape somewhere, away from Frank Bellarosa, though for various reasons they never do. As the two Sutter's become more involved with Bellarosa and his life, John steps away from the people that he has considered his friends for years, even cutting himself off from his family and Susan's Sutter seems to have realized that he was no better than they were, and if one good thing came of his association with Frank, it was John's ability to see they type of person he had become.

John represents Bellarosa in a bail hearing regarding the murder of Juan Carranza, a Columbian drug dealer, perjuring himself in order to be sure that Frank does not have to spend any time in jail. John meets the men that Bellarosa associates with and gets a better idea of the life of the Mafia don, realizing that Bellarosa is nothing like the fumbling man who is trying to fit into the life of those on the gold coast. Bellarosa is intelligent, and dangerous, as is being associated with him. John finds this out first hand when someone attempts to murder Bellarosa while the Sutter's and Bellarosa's enjoy an evening out. Though wearing a bulletproof vest, Frank suffers other injuries, and it is John's care that allows for Frank's survival.

Frank's empire crumbles while he is recuperating, and he is protected by the federal agents he once despised. Seeing no other option, Frank gives them the information they seek, providing information about his Mafia family and associates. His possessions are seized by the government, and the great estate of Alhambra is taken apart piece by piece. Bellarosa offers John anything he wants, knowing that John had saved his life. John's request is simple. Sutter tells Frank to end his affair with Susan, and tell her that she will not be running away to Italy with Bellarosa. Frank does not argue the point but simply tells John that he will do as he asked.

In the end, Frank's inability to control his wants and needs is his undoing. Susan Stanhope Sutter kills Frank with his own weapon, one that he had asked her to hold for him. It was not the Mafia that brought about his death, it was a woman. Ironically, Bellarosa had once told John to be careful of the women that he chose to have a relationship with, as they could result in a man's downfall. Susan claims that she had killed Frank for John, in order to free him from the don's clutches. Susan is found not guilty of the murder charges against her and moves away from the area with her parents. John Sutter still loves his wife, and she him, but their lives have been forever changed by their association with Frank Bellarosa. John Sutter winds up living in the gatehouse of the Stanhope Estate with Ethel Allard, the widow of George and lover of Augustus Stanhope.

John has plans for the future, and considers them while walking the once again ruined estate of Alhambra. Sutter is considering buying another boat, having destroyed his to keep the IRS from claiming it and sailing around the world. Once his journey is complete, he might dock in Hilton Head, the home of his in-laws and Susan, to see if their love can survive the time they have spent with Frank Bellarosa.

More summaries and resources for teaching or studying The Gold Coast.