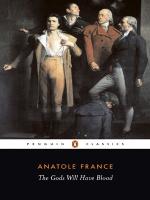 The Gods Will Have Blood: Summary & Study Guide

Anatole France
This Study Guide consists of approximately 59 pages of chapter summaries, quotes, character analysis, themes, and more - everything you need to sharpen your knowledge of The Gods Will Have Blood:.

The Gods Will Have Blood: Summary & Study Guide Description

The Gods Will Have Blood: Summary & Study Guide includes comprehensive information and analysis to help you understand the book. This study guide contains the following sections:

This detailed literature summary also contains Topics for Discussion on The Gods Will Have Blood: by Anatole France.

"The Gods Will Have Blood" by Anatole France is a historical fiction set during the French Revolution. The narrative focuses on the political rise and downfall of painter Evariste Gamelin. "The Gods Will Have Blood" is a terrifying account of the Reign of Terror and its many executions which were justified by the desire to punish those who were not loyal to the Republic.

Evariste Gamelin, a young Parisian artist and a dedicated Republican, works on a pack of Revolutionary cards in his attempt to provide for his mother, despite his poverty. Jean Blaise refuses to buy Evariste's cards, but his daughter, Elodie, flirts with the young artist. She meets him a week later and convinces him to reveal his feelings for her, eventually persuading him to engage in a secret liaison. Citizeness Rochemaure takes an interest in Evariste because she wants to meet Marat, and she helps Evariste acquire a seat as a magistrate on the Revolutionary Tribunal for the day she will need a friend in court.

As a magistrate, Evariste judges many, his sense of justice leading to many executions. He accompanies Jean Blaise and a group of artists on an excursion through the countryside. After Rochemaure visits Brotteaux, the letter she writes is stolen by her lover, Henry, and taken to the Committee of General Safety. Evariste begins to follow the doctrines of Robespierre, condemning even more of the accused to the guillotine in an attempt to preserve the Republic by slaughtering her enemies.

Shortly after allowing Father Longuemare to move into his garret, Brotteaux rescues a prostitute, Athenais, who is being investigated by one of the Revolutionary Committees. Meanwhile, Evariste condemns Maubel to death, a young man he falsely believes to be Elodie's first lover. After Rochemaure's letter comes to the attention of several delegates, Brotteaux, Father Longuemare, Rochemaure, and Athenais are all arrested. When Fortune de Chassagne is arrested, Julie, his lover and Evariste's sister, visits Citizeness Gamelin to ask for help, but when Citizeness Gamelin talks to her son, Evariste insists he would denounce Julie himself if he knew where she was. Evariste eventually condemns Fortune to death and in a separate trial, he sentences Brotteaux, Father Longuemare, Rochemaure, and Athenais to death as well. Tired of the Revolution and the deaths it brings, people begin to plot against Robespierre and Robespierre and his council are finally arrested and executed, including Evariste. Five months later, Elodie takes a new lover, the artist Desmahis.

More summaries and resources for teaching or studying The Gods Will Have Blood:.

The Gods Will Have Blood: from BookRags. (c)2022 BookRags, Inc. All rights reserved.