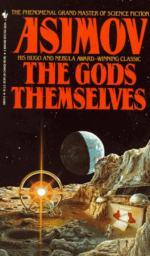 The Gods Themselves Summary & Study Guide

Isaac Asimov
This Study Guide consists of approximately 31 pages of chapter summaries, quotes, character analysis, themes, and more - everything you need to sharpen your knowledge of The Gods Themselves.

The Gods Themselves Summary & Study Guide includes comprehensive information and analysis to help you understand the book. This study guide contains the following sections:

This detailed literature summary also contains Topics for Discussion and a Free Quiz on The Gods Themselves by Isaac Asimov.

The Gods Themselves is a story of two worlds that are struggling for power and survival, although they have never met. One world, the human's world, is so consumed with the need for free energy they are unwilling to give up their source of power, even though it may destroy all life in their Universe. The other world needs the energy pulled from the Earth's Universe because their own Sun is about to die. The scientists struggle against an unseen time clock to save their world.

Dr. Peter Lamont meets with Dr. Hallam, the creator of the Electron Pump and asks Hallam about the intelligence of the men from the parallel Universe that initiated the process. Hallam insists that humans cannot be pulled down in stature and begins a private vendetta against Lamont. Lamont begins work on deciphering the code sent by the men from the other Universe and in the process realizes that the Electron Pump, while giving humanity all the free energy it needs, is overloading the Sun, which will explode—perhaps within a few short years. Lamont also receives a message from the parallel Universe confirming that the pump is bad, although they cannot stop pumping. Despite his valid concerns, Lamont can find no one to listen to him.

In the parallel Universe, a being called Dua has begun learning with her Rational mate, Odeen. Dua inadvertently learns that the new source of energy that their world has found to sustain itself, since its Sun is dwindling and dying, will cause the other Universe to explode. This explosion will give Dua's world all the energy it needs for thousands of years. Dua rebels and tries to send a message to the other Universe to stop their pumping. As it happens with all of Dua's people, her time comes to pass on and and when she fully combines with her two other mates, they form the creature named Estwald, that was the creator of the pump.

On the Lunar colony on the moon, Dr. Denison arrives, and because of Lamont's previous warnings to various people, Denison is able to start researching ways to fix the problem with the electron pump. Denison and his assistant, Selene, are able to figure out how to make a new energy that counteracts the Electron Pump so the pumping doesn't have to be stopped. Denison realizes that there are other applications for the energy and plans are made for ships to be built that will be propelled by this new system. Denison and Lamont are both labeled as heroes on Earth, although Denison opts to stay on the moon.

More summaries and resources for teaching or studying The Gods Themselves.

The Gods Themselves from BookRags. (c)2022 BookRags, Inc. All rights reserved.