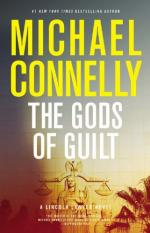 Six weeks have passed. Mickey was injured in the crash but is mostly recovered. La Cosse’s trial has begun. Mickey reserves his opening statement for after the prosecution has presented their case. The only surprise in the prosecution case in another of La Cosse’s prostitutes who claims that La Cosse physically attacked him for withholding money. However, Mickey is able to put holes in the story on his cross. The prosecution rests on a Friday and the defense will begin on Monday. Before they begin, however, Mickey presents an amended witness list to the judge. The prosecutor objects, so Mickey agrees not to call any of the new witnesses on the list until the following day so that the prosecutor has time to review the new...

The Gods of Guilt from BookRags. (c)2021 BookRags, Inc. All rights reserved.