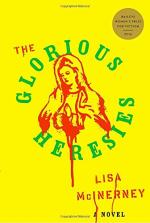 This detailed literature summary also contains Quotes and a Free Quiz on The Glorious Heresies by Lisa McInerney .

The following version of this book was used to create this study guide: McInerney, Lisa. The Glorious Heresies. New York: Tim Duggan, 2015.

Ryan Cusack begins The Glorious Heresies in Cork, Ireland by leaving his 15-year-old boyhood behind as he brings Karine D’Arcy, his girlfriend, into his home. As Ryan comes into his new manhood, in another part of Cork, Maureen Phelan uses a Holy Stone to kill a man who has broken into her house, which is a former brothel. Maureen calls her illegitimate son, Jimmy Phelan, to help her sort out the situation. Jimmy contracts Tony Cusack, and old acquaintance of his and Ryan’s father, to help. When Tony returns to retile the floor, he accidentally lets Maureen know the name of the man she killed: Robbie O’Donovan.

Soon, Georgie Fitzsimons, a prostitute, begins searching for Robbie O’Donovan, her drug dealer and boyfriend. After giving up on Robbie and leaving the brothel to work on the streets, Georgie contacts an acquaintance named Tara Duane to set her up with a drug dealer; Tara gives Georgie Ryan’s number.

On the night that Tony sold Ryan’s late mother’s piano to Jimmy, Ryan is coaxed into his neighbor's, Tara Duane, house. While there, Ryan gets very drunk and half remembers having sex with Tara. When Tony learns that Ryan had been over at Tara’s, he beats Ryan. Ryan becomes extremely frustrated that everyone at school seems oblivious to the bruises on his face, and so throws a bag of cocaine at the headmaster and decides to leave school. By the next year, Ryan has left home and is working for a high-level drug lord named Dan Kane.

The next year, Maureen has begun talking to an apparition of Robbie O’Donovan. She tells him how her boyfriend had left her when she became pregnant, leaving her to deal with her pious parents and the shame of the clergy on her own, eventually being sent away to London without her child. She talks to the vision about the possibility of redemption. Maureen goes to a confessional to confess her sin of murder, but ends up condemning the clergy’s treatment of the congregants instead. She also expresses her belief that the punishment she endured by the Church as a young, single mother acts as penance for all of her future sins.

In the past year, Georgie joined the Christians Active In Light (CAIL) mission because the leader, William Tobin, offered her rehabilitation from her life as a prostitute. At the mission, Georgie meets David Coughlan, and they fall in love. After procuring cocaine from Ryan for herself and David, though, Georgie feels like a corrupting influence on David. Georgie soon becomes pregnant by David, David leaves CAIL to live with his parents, and Georgie learns from Maureen that Robbie is dead. After having the child, David returns with his parents to take the child; Georgie is distraught, feeling that her salvation is being taken from her, and runs away from CAIL to return to the streets as a prostitute.

In the meantime, Tony expresses his rage at Tara Duane’s treatment of Ryan by punching in one of her windows. For this, Tony attends a court-ordered rehabilitation clinic, where he adamantly rejects the notion that his drinking is the problem; he thinks the situation warranted medicinal alcohol. Ryan attends the clinic’s family therapy, but leaves thinking that Tony does not care about him and will never change. After Tony gets out, Ryan is caught with cocaine and must live at home until his trial. During this time, Georgie approaches the Cusack home and inquires about Robbie, as Tara had told her that Tony knew Robbie. Tony rages and throws Georgie out. At Ryan’s trial a few weeks later, Ryan is sentenced to nine months in prison. While Ryan is in prison, Karine learns that she is pregnant and subsequently has an abortion. She is angry that Ryan is not there for her.

When Jimmy learns about Georgie’s visit to Tony, he takes Tony to a hidden location by the shore and threatens to kill him and dump the body in the sea. Jimmy then tells Tara to find Georgie for him.

When Ryan gets out of prison, he suffers a break down, precipitated by watching others laugh at televised violence and victimhood, which he feels too closely for comfort. The next day, he learns that Karine cheated on him while he was in prison, and his idealization of her is shattered. Ryan begins to serially cheat on Karine. This unhealthy pattern continues until Ryan and Karine go to a music festival with friends, and Ryan is told that his idealization of Karine is unfair and that he should approach Tara Duane for an explanation of the night they spent together.

After leaving CAIL, Georgie returns to the old brothel where Robbie died. She breaks in and finds the scapular she had left there when she worked in the brothel. Georgie realizes that Robbie had come to the brothel on the night of his death to retrieve it for her. Jimmy finds Georgie in the brothel and wants to kill her, but Maureen stops him, citing Georgie’s motherhood as reason to believe she will stay quiet. Jimmy acquiesces, instead making Georgie work in one of his brothels. Maureen tells Georgie that the Church only categorizes some women as whores to fortify its own power.

Maureen travels to the old Magdalene Laundry, where unmarried mothers of her generation were sent as punishment. She meets a vagrant there who tells her that the laundry was burned down, cleansing the area of its presence. Maureen takes the cleansing power of fire to heart, and she burns down the old brothel. She then joins a cult under the name “Mo Looney,” the name she would have taken had she and Jimmy’s father married, and burns down a church in the country.

After Jimmy has Georgie, Tara realizes that she and Tony no longer have any use for Jimmy, and so wants to leave Cork. To facilitate this, Tara wants Tony to burn her house down. Anxious about how much Tara knows about Robbie and Jimmy, Tony strangles Tara instead and uses Jimmy’s boat to dump Tara’s body. When Jimmy finds out, he tells Tony to kill Georgie, to finish up the loose ends surrounding Robbie’s death. Ryan overhears this and insists on taking his father’s place. After dealing with Georgie, Ryan overdoses on drugs and ends up in the hospital, with everyone thinking he tried to kill himself.

The Glorious Heresies ends with explanations of what Ryan did with Georgie, Ryan’s night with Tara, and then a final conclusion. Ryan had sent Georgie to live in London rather than kill her. Five years before, Tara had gotten Ryan drunk and raped him, then implied that Ryan had come onto her. The novel then ends with Maureen finding Ryan about to jump into the River Lee from the ruin of the old brothel. Maureen promises to redeem Ryan.