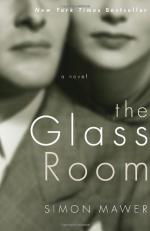 Simon Mawer
This Study Guide consists of approximately 39 pages of chapter summaries, quotes, character analysis, themes, and more - everything you need to sharpen your knowledge of The Glass Room.

This detailed literature summary also contains Topics for Discussion and a Free Quiz on The Glass Room by Simon Mawer.

The Glass Room by Simon Mawer takes place over the span of 60 years. Starting in the early 1920s before World War II and spanning into the Cold War that gripped Eastern Europe. The story follows the relationship of Liesel and Viktor Landauer and the house they build to share their lives together in. The House becomes the central character in the novel and through the House and experiences that happen there, the story unfolds.

The book begins with Liesel and Viktor meeting Rainer von Abt on their honeymoon. Rainer agrees to build the couple their dream home in Mesto, Czechoslovakia. Shortly after, Liesel gets pregnant. Her friend Hana tells her that her husband will not remain faithful to her because of her new condition. Unfortunately, Viktor does cheat on his wife with a call girl named Kata. Kata and Viktor's relationship grows as Viktor and Liesel's relationship cools. After the house is finished, Viktor and Liesel have a second baby, which leaves her sick and frail. Hana stays by her side through the sickness, proving how much she loves Liesel. In the background of the story, is the changing political climate in Europe. Hitler is getting more power. Kata disappears soon after, only to show up at a benefit that the Landauers throw for other Jews. Liesel, not knowing who Kata is and invites her to live with them. Soon Kata becomes the children's nanny and she has moved into the house. The Landauers decide to go to Switzerland.

While they are gone, Hana discovers that their house has been taken over by the Nazis. They are using the house as a lab where they try to measure the difference between Aryans and "sub races." Hana begins a relationship with the leader of the lab in order to get money for her and her Jewish husband, whose accounts have been frozen. The Nazi ends up betraying Hana. Both she and Oskar are sent to camps. The Landauers then try to go to Paris, but Kata and Marika are not allowed to continue on because they are Jewish. Finally Liesel, Viktor, and their children go to Cuba and then the United States.

Some time has passed and Hana returns to the House. She discovers it is used as a gym for physiotherapy. Zdenka, a former dancer, works there. She and Hana fall in love and begin to run a dance school and rehabilitation classes from the Glass Room. Many years later, after Viktor has died and Liesel has gone blind, the Russians invite Liesel to visit her old home. After returning to Mesto, Liesel is able to reconnect with Hana.

More summaries and resources for teaching or studying The Glass Room.