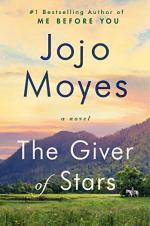 Jojo Moyes
This Study Guide consists of approximately 70 pages of chapter summaries, quotes, character analysis, themes, and more - everything you need to sharpen your knowledge of The Giver of Stars.

The Giver of Stars Summary & Study Guide includes comprehensive information and analysis to help you understand the book. This study guide contains the following sections:

This detailed literature summary also contains Quotes and a Free Quiz on The Giver of Stars by Jojo Moyes.

The following version of this book was used to create this guide: Moyes, Jojo. The Giver of Stars. New York, Penguin Random House LLC, 2019.

The book opens with a scene of a woman named Margery riding through the snowy Kentucky mountains to deliver some books. She is attacked by a man named Clem McCullough, and she is able to fight him off before riding away in fear.

The first chapter picks up a few months earlier at a town hall meeting, where the people of Baileyville agree to participate in a pack horse library, wherein women of the town will deliver books to anyone who wants to read them. Margery O'Hare, the woman in charge of running the library, says they need more riders to participate, and a young Englishman named Alice volunteers herself for the job. Margery teaches Alice the delivery routes and introduces her to the local families, and Alice learns to love her job over time. She and the other librarians begin to form friendships, but Alice is also experiencing problems at home, between her disapproving and controlling father in law, Mr. Van Cleve, and her husband Bennett, who treats her like a stranger. Alice also begins flirting with a warm, kind man named Fred who owns the library and often helps make repairs and take care of the building.

Meanwhile, Margery has her own lover, a man named Sven who wants to marry her, although she refuses every time the conversation comes up. Margery also catches wind of plans for the mines to expand and get rid of homes to continue strip mining, and as she begins sending out letters to the families to warn them, whispers of unionization start growing stronger. Pressure begins mounting between Van Cleve, who happens to own the mining company and has quite a lot of sway in the town, and the librarians, as he doesn't approve of Margery and the trouble that she is causing him.

When they need more help manning the library, Margery hires an old friend of hers, a young black woman named Sophia. One night, some drunk men stumble into the library to find her, and Van Cleve calls a town meeting about the dangers of having a colored girl working at the library, and the townspeople become slightly more of the library program. Meanwhile, the librarians start to catch on that Alice is having trouble with Bennett, so Margery gives her a little blue book titled "Married Love" that has advice that will help. One day, Margery comes back after a deliver acting strange, and Sophia notices that their copy of Little Women is missing.

Alice is sad that two of the local little girls that she delivers to won't get Christmas presents, so she takes two of Mr. Van Cleve's late wife's dolls, which are still on display around the house. When he finds out, he beats her without abandon, until finally Bennett step in to make him stop. Alice decides to leave and go live with Margery, and refuses to come home after multiple attempts to get her back, including a bribery. Fred is very upset that Alice is abused and becomes very protective, and the two continue developing their relationship. When Beth, one of the librarians, falls and breaks her arm, one of the local women, Kathleen, volunteers to take her place. Shortly thereafter, Margery discovers that she's pregnant with Sven's child.

In spring, it starts raining heavily, and develops into a flood. The librarians put themselves to work to help everyone they can: Alice and Fred move all of the library books into his house, Margery saves Sophia and her brother William before they are washed away, and Beth and another librarian named Izzy save three young girls. There is another surge of water that makes the flood even worse, which is also a thick black color and smells of chemicals. After some investigation, Margery discovers that one of the damns from the mine burst and caused all of the extra damage. She confronts Van Cleve, who becomes even more hateful toward her. As the snow continues melting with the spring, the dead body of Clem McCullough is found with a bloodstained copy of Little Women.

Margery is arrested shortly after, and it's assumed that Van Cleve had a hand in making sure that was the case. Alice and the other librarians do their best to make Margery happy, but she becomes more and more depressed. She has her baby in the jail cell, and then gives her to Sven and tells him to leave so that she can have a better life. He obliges. The trial comes a few weeks later, and when all hope seems lost, the librarians convince McCullough's daughter to come and testify, and she confirms that her father was simply going to return his library book, and that this was all an accident. With that, Margery is free to go.

Alice had already decided to move back to England after the trial had ended, but Fred tells her that she can have her marriage annulled after she informs him that it was never consummated. Margery tells Sven that she does want to stay in Baileyville after all, and they get married. Alice and Fred get married a month later, and the library continues to stay open five days a week, run by Alice and Margery as equal partners.

More summaries and resources for teaching or studying The Giver of Stars.

The Giver of Stars from BookRags. (c)2022 BookRags, Inc. All rights reserved.