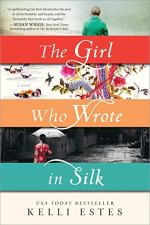 The Girl Who Wrote in Silk Summary & Study Guide

Kelli Estes
This Study Guide consists of approximately 43 pages of chapter summaries, quotes, character analysis, themes, and more - everything you need to sharpen your knowledge of The Girl Who Wrote in Silk.

The Girl Who Wrote in Silk Summary & Study Guide Description

The Girl Who Wrote in Silk Summary & Study Guide includes comprehensive information and analysis to help you understand the book. This study guide contains the following sections:

This detailed literature summary also contains Quotes and a Free Quiz on The Girl Who Wrote in Silk by Kelli Estes.

NOTE: The following version of this book was used to create this study guide: Estes, Kelli. The Girl Who Wrote in Silk. Sourcebooks. 2015.

Kelli Estes’s The Girl Who Wrote in Silk is a dual historical and contemporary novel in which modern-day aspiring hotelier Inara Erickson discovers a beautifully embroidered sleeve depicting a tragic event from the 1880s through which Chinese-American Mei Lien lived over a hundred years before. Twenty-four-year-old Inara discovers the silk sleeve hidden beneath a step in the Orcas Island house that belonged to her deceased Aunt Dahlia and has been in the family for years. The sleeve depicts a scene of a ship surrounded by Chinese people in the water with demons lurking about on board the ship. Inara, who is in the process of transforming the house into a boutique hotel using a personal loan from her shipping magnate father, decides she will reach out to Professor Daniel Chin at the University of Washington-Seattle for more information regarding the sleeve.

Daniel is amazed by the quality of the sleeve and commits to researching it. At the same time, he and Inara develop romantic feelings for one another. Based on the clues and information Daniel discovers on the sleeve over time – such as the name of the ship depicted, the Prince of the Pacific – Inara is able to determine the ship belonged to Campbell Lines, the former name of Premier Maritime Group, the company which her family now runs. Inara is deeply disturbed by this. Going into the company’s old records, she discovers the Prince took on some 300 Chinese residents of Seattle, but that the residents never got off when the ship docked. She realizes the ship must have dumped the Chinese people into the water to drown. She hides the truth from Daniel to protect her family, the company, and against her father’s threats to pull his personal loan.

As Inara comes to discover the truth of the past, the past itself is played out in chapters which irregularly alternate with chapters occurring in the present. In the historical chapters, Mei Lien is introduced as a 17-year-old girl and resident of Seattle who, along with hundreds of other Chinese-Americans, is rounded up by a mob in the 1880s to be shipped back to China. However, while on board, Mei Lien overhears Duncan Campbell (founder of Campbell Lines and ancestor of Inara) plotting to kill the Chinese on board by drowning them. While still not out at sea, Mei Lien’s father pushes her overboard. Mei Lien is saved by Orcas Island resident Joseph McElroy, a kind mail carrier who does not harbor prejudices against the Chinese. Joseph and Mei Lien come to fall in love and marry, but Mei Lien is horrified to learn her neighbor is actually Duncan Campbell. For years, Duncan attempts to buy the McElroy farm, but Joseph refuses. Eventually, Joseph and Mei Lien have a son named Yan-Tao Kenneth McElroy, and Joseph is killed in a boat accident some years later.

Mei Lien, who contracts stomach cancer, realizes she must send Yan-Tao to live with Joseph’s sister and her family, and must sell the land to Duncan to provide for Yan-Tao. This is how the McElroy land comes into possession by Inara down through the century; and Yan-Tao turns out to be the great-great-grandfather of Daniel Chin, who has the rest of the robe from which the detached sleeve came. Inara must admit the truth of the past to Daniel and his family, who though angered Inara did not tell them sooner, are forgiving. Inara’s father dies of a massive heart attack, after which he apologizes to Inara for what has happened. Inara’s brother, Nate, takes over the company. Inara, Nate, and their sister, Olivia, go public about the company’s history and formally apologize for it. Meanwhile, Inara and Daniel continue their relationship while Daniel’s family invests in the hotel. Inara hopes it is a fitting end to a sad story and Mei Lien’s tragic life.

More summaries and resources for teaching or studying The Girl Who Wrote in Silk.

The Girl Who Wrote in Silk from BookRags. (c)2022 BookRags, Inc. All rights reserved.