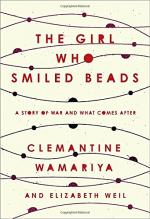 Clemantine_Wamariya and Elizabeth Weil
This Study Guide consists of approximately 38 pages of chapter summaries, quotes, character analysis, themes, and more - everything you need to sharpen your knowledge of The Girl Who Smiled Beads.

Chapter 4 details scenes spanning from 2000 - 2003. Clemantine and Claire began renting an apartment. Claire started sixth grade. She colored while the other children learned. Though she tried playing her "new role," Clemantine felt "overwhelmed and miserable" (53). She stopped eating. No one seemed to worry what or how she was doing, until her American sponsors set her up with the Thomas family.

She spent a trial period with the Thomases in Kenilworth during the summer. If everything went well, she could stay with them during the school year. Meanwhile, Claire's life was filled with "chaos" (56). She worked multiple jobs. Her marriage was unraveling, and she was raising her children alone (56).

More summaries and resources for teaching or studying The Girl Who Smiled Beads.

The Girl Who Smiled Beads from BookRags. (c)2022 BookRags, Inc. All rights reserved.