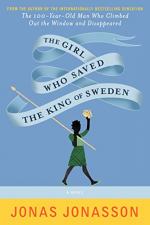 The Girl Who Saved the King of Sweden Summary & Study Guide

Jonas Jonasson
This Study Guide consists of approximately 71 pages of chapter summaries, quotes, character analysis, themes, and more - everything you need to sharpen your knowledge of The Girl Who Saved the King of Sweden.

The Girl Who Saved the King of Sweden Summary & Study Guide includes comprehensive information and analysis to help you understand the book. This study guide contains the following sections:

This detailed literature summary also contains Quotes and a Free Quiz on The Girl Who Saved the King of Sweden by Jonas Jonasson.

The Girl Who Saved the King of Sweden is a zany, caper-type of novel with some serious undertones and a very admirable heroine.

Nombeko is a poor young black girl from the slums of South Africa who ends up involved in a convoluted plot involving an atomic bomb and a plot to overthrow the Swedish monarchy. Born in the 1960s in South Africa, during apartheid, she is set up to fail. However, she is gifted with a rare intelligence, a quick wit and an uncanny capacity to easily manage situations and charm those she meets.

Her journey takes her from the slums of Soweto to a top secret government facility, where she unintentionally helps build seven secret atomic bombs. There she gets entangled with two Israeli Mossad agents and a low-level Chinese government official before fleeing to Sweden, where she immediately meets two twin brothers. One twin yearns for a normal life, while the other seeks to depose the Swedish king. Unfortunately, one of the bombs follows her to Sweden, and there the adventure picks up.

In Sweden, Nombeko’s gang expands to three Chinese art forgers, a PTSD-ridden American veteran, the two twins, and a young revolutionary woman. Together they live in an old pillow factory, hiding their bomb and hoping for a way to get rid of it. For years they coexist as family, each person following their own pursuit, until the Mossad shows up to reclaim their bomb. At this early climax, the building they live in is destroyed by the Swedish National Task Force, their American veteran is killed, and the crew must flee with the bomb in tow.

By means almost unexplainable and filled with wild coincidences, the group is able to hide the bomb on an old potato farm for years, undetected. During these years Nombeko and her group manage to settle into something like normal life. One twin gets a doctorate degree, Nombeko makes millions farming potatoes, eventually they make a magazine together that the Prime Minister loves to read. But the bomb will not wait forever, and events conspire to finally bring Nombeko a way to get the bomb out of the barn so she can live without worry.

The relief comes when an old friend of hers, the Chinese government man, shows up in Sweden to visit the King. However, now he’s the President of China. Nombeko, the twins, and Celestine drive to the palace in hopes of the President remembering Nombeko. Of course he does, and gets her an audience with the king and the Prime Minister. However, trouble ensues when she gets them all in the back of the truck to see the bomb and the monarchy-obsessed twin slams the back of the truck and kidnaps them all.

For a long twelve hours trapped on the potato farm, Nombeko and her gang get to know the king and the Prime Minister in ways that didn’t expect. Each person in the crowd learns something new about judging people without knowing them. By the end of the night, they are all friends, and Nombeko and the Prime Minister have a way to get rid of the bomb.

The next day, the Chinese President is preparing to leave, but first he has a meeting with the Prime Minister. He asks his old friend Nombeko to join them. Meanwhile, the President’s wife is at the airport, having a difficult time getting her new Arabian horse on the plane back to China. Nombeko rushes to the airport to help, and finds that the President has bought a new car to ship back to China. The crate for the Volvo is the perfect size for the bomb and Mrs. President’s horse, and Nombeko makes the switch.

The bomb goes to China, where the kind President can have it dismantled and study its technology, and the rest of Nombeko’s crew finds their place in a bomb-free world.

More summaries and resources for teaching or studying The Girl Who Saved the King of Sweden.

The Girl Who Saved the King of Sweden from BookRags. (c)2022 BookRags, Inc. All rights reserved.