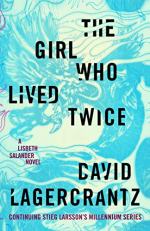 The Girl Who Lived Twice Setting

David Lagercrantz
This Study Guide consists of approximately 60 pages of chapter summaries, quotes, character analysis, themes, and more - everything you need to sharpen your knowledge of The Girl Who Lived Twice.

The Fountain and the Statue of Thor in Mariatorget

The fountain and the statue of Thor in Mariatorget is where Nima sat most of the time. The statue is important because it symbolizes his state of emotional isolation. People passed the statue every day. Still, some people, Blomkvist, did not notice him. In addition, the setting symbolizes Nima's spirit. He was a fighter and his choice of staying near this statue characterized him as such. It helped him reserve his dignity.

Vladmir Kuznetsov's hosts his party in a restaurant called Versailles. This setting is significant because this is where Lisbeth launches her attack against him and attempts to kill her sister. The setting is also significant because it creates a contrast with Nima’s situation. Many people come to the party because Kuznetsov is a celebrity. Even though he is a fake and has no morals, people listen...

More summaries and resources for teaching or studying The Girl Who Lived Twice.

The Girl Who Lived Twice from BookRags. (c)2022 BookRags, Inc. All rights reserved.