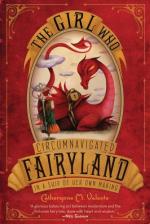 Catherynne M. Valente
This Study Guide consists of approximately 53 pages of chapter summaries, quotes, character analysis, themes, and more - everything you need to sharpen your knowledge of The Girl Who Circumnavigated Fairyland in a Ship of Her Own Making.

The Girl Who Circumnavigated Fairyland in a Ship of Her Own Making Summary & Study Guide includes comprehensive information and analysis to help you understand the book. This study guide contains the following sections:

This detailed literature summary also contains Topics for Discussion and a Free Quiz on The Girl Who Circumnavigated Fairyland in a Ship of Her Own Making by Catherynne M. Valente.

This adventure and fantasy novel for young people is the story of a twelve-year-old girl named September, whose visit to Fairyland takes her on a perilous and life-changing quest. Similar to many tales that follow the pattern of the archetypal "Hero's Journey," September makes both new friends and new enemies, acquires powerful tools and weapons, and learns important lessons - in this case, about the power of choice and the value of self-sacrifice.

September is taken from her home in Nebraska by the playful Green Wind. As they ride through the air to where September will gain admittance to Fairyland, September reveals that she's cold. The Green Wind gives her his Jacket, the first of several powerful tools and weapons she receives.

Once she is allowed into Fairyland, September is plunged right into her adventures. After navigating the Perverse and Perilous Sea, and choosing a path from a four-item signpost, she encounters three witches who, as part of their offer to teach September how to see the future, ask her to retrieve a magical Spoon from The Marquess, the evil ruler of Fairyland. September agrees, and sets off on her quest. Along the way she has several important and challenging encounters - with Ell (a learned wyvern), Lye (a woman made entirely of soap), and the vicious Glashtyn (a race of humans with the heads of horses). She also learns the story of Good Queen Mallow and of how The Marquess has changed Mallow's happy, prosperous kingdom into a land of rules and prohibitions. Eventually, September makes her way to Pandemonium, the capital city of Fairyland. There, she encounters The Marquess, who gives her the Spoon in exchange for September's agreement to search out a magical weapon hidden in the distant Worsted Woods. After leaving The Marquess, September discovers a blue-skinned boy kept in a cage. He reveals that he is a water spirit with the power to grant wishes, that he is being kept prisoner by The Marquess, and that his name is Saturday. Using the power of the Spoon, September frees him, and they, along with Ell, set off for the Worsted Woods.

With the help of fairy Calpurnia and changeling Penny, September and her friends make their way to Autumn, a land of eternal fall. There, they encounter the Spriggans, a race of three fingered fairy spirits who offer September guidance on how to navigate the Worsted Woods - which, they add, she must do alone. September makes her way into the heart of the Woods where she has an encounter with Death, who in turn conceals within her mouth a casket containing the weapon September seeks. After singing Death to sleep, September retrieves both the casket (which describes the item within as manifesting the power of the seeker's mother) and the weapon (which for September manifests a Wrench, a symbol of her mother's work and skills). September returns to Autumn with the Wrench, but before she can set out on her return journey to Pandemonium, Ell and Saturday are kidnapped by lions in the service of The Marquess.

September sets out to rescue her friends who are being kept prisoner in the Lonely Gaol, creating creates a boat out of debris she finds on the beach. After a series of adventures, she navigates her little boat through the storms surrounding the Lonely Gaol and lands. There, September again encounters The Marquess who reveals her master plan - for September to use her Wrench to uncouple the links between Fairyland and the Human World. September refuses to do so, using the Wrench to perform a feat of magic that would end The Marquess's tyranny. The Marquess, in the manner of other fairy tale maidens, puts herself into a deep sleep. This, in turn, causes the Lonely Gaol to start falling apart. With the help of one of Saturday's wishes, September manages to rescue herself and her friends, returning them to Fairyland. There, she discovers that in the future, she will be able to spend half her time in Fairyland and half in the human world. She then returns to the human world, her time in Fairyland over...for the time being.

More summaries and resources for teaching or studying The Girl Who Circumnavigated Fairyland in a Ship of Her Own Making.

The Girl Who Circumnavigated Fairyland in a Ship of Her Own Making from BookRags. (c)2022 BookRags, Inc. All rights reserved.