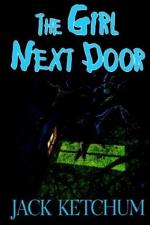 Jack Ketchum
This Study Guide consists of approximately 47 pages of chapter summaries, quotes, character analysis, themes, and more - everything you need to sharpen your knowledge of The Girl Next Door.

The Girl Next Door Summary & Study Guide includes comprehensive information and analysis to help you understand the book. This study guide contains the following sections:

This detailed literature summary also contains Topics for Discussion and a Free Quiz on The Girl Next Door by Jack Ketchum.

The Girl Next Door by Jack Ketchum is a harrowing tale about the power of adult suggestion over children, the power of group dynamics, and the horrifying result of childhood fantasies given life. Young David and his friends are at an age where sexual fantasies and ideas are beginning to foster. Meg and her sister, Susan, come to live with neighborhood's favorite mom, Ruth, when their parents are killed in a car accident. As David begins to find himself with a crush on Meg, the others in the neighborhood begin to notice changes in Ruth. Ruth becomes more an more obsessed with Meg as a young woman, and uses her to teach her sons and their friends about the evils of women. When the boys begin to become sexually frustrated with mental images of Meg, Ruth begins to beat and torment Meg and disabled Susan. As the beatings and torment increase, and as Meg is held captive in a dark, cold basement, usually nude, young David finds himself questioning the situation and his own role in it. Torn between his desires and the knowledge that Ruth has given permission for the young children to torment Meg and the clear downward spiral of the situation, David eventually decides to help Meg escape after the children, under direction of Ruth, begin to rape Meg. After Ruth's sons cut Meg and Ruth cauterizes it with a cigarette, David helps Meg to escape. When she returns to free her sister, however, Meg is again captured. As punishment, Ruth orders the boys to burn out her clitoris with a heated tire iron. When David, pushed to the limit, tries to run, he and Susan are held captive as well. Following an attempt at escape, Meg uses the last of her energy to help David and Susan. Her heroic efforts lead to her death, but also to a rescue by police. As David and the others are led up the stairs, David, in a burst of anger, shoves Ruth down the stairs, killing her.

"The Girl Next Door", while certainly horrifying in content, particularly in light of it's base in a true story, is none the less a lesson in the amazing power of group mentality. The book's shift from the innocence of childhood to the buddings of sexual ideas to the dangers of a lack of parental structure to the total chaos of a complete breakdown of morality is a journey that leaves the reader sickened, but unable to put down the story. From beginning to end, "The Girl Next Door" delivers a powerful story that faint of heart readers should avoid, but one that deserves to be read.

More summaries and resources for teaching or studying The Girl Next Door.

The Girl Next Door from BookRags. (c)2022 BookRags, Inc. All rights reserved.