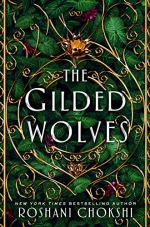 Roshani Chokshi
This Study Guide consists of approximately 57 pages of chapter summaries, quotes, character analysis, themes, and more - everything you need to sharpen your knowledge of The Gilded Wolves.

This detailed literature summary also contains Quotes and a Free Quiz on The Gilded Wolves by Roshani Chokshi.

The following version of this book was used to create this study guide: Chokshi, Roshani. The Gilded Wolves. Wednesday Books, 2018. Hardcover.

Séverin and Enrique attempt to steal a compass rumored to contain a treasure map from the Patriarch of House Nyx, Hypnos. Unfortunately, they trigger a trap and nearly lose Séverin’s arm in the process. Enrique is able to free him in time and they escape to a carriage, elated to find that there is something inside the map. Meanwhile, another member of Séverin’s group named Laila ensures that the courier of House Kore - who Séverin was pretending to be to steal the compass - receives an invitation to an important party before returning to her baking for their hotel, L’Eden. It is explained that the world functions on a magic known as forging that allows those that can use it - forgers - to create nearly anything they want. Their engineer Zofia arrives, only to steal some cookie dough and leave again. Laila then finds Tristan, the youngest of the group with powerful forging abilities like Zofia. When Séverin and Enrique return, all five of them work together to figure out the puzzle in the compass. It reveals the symbol for a legendary artifact known as the Eye of Horus, rumored to show the legendary Babel Fragment to any who look for it. Unfortunately, a few weeks later, Séverin receives a letter from Hypnos who knows he stole the compass.

Séverin and Enrique go to Hypnos’ estate and it is revealed that he did not know who the thief was, but used blood forging to ensure that the thief was the only one who could read the letter. He asks Séverin to help him obtain the Horus Eye from House Kore and, in return, Hypnos will readminister the inheritance test on Séverin, as the previous test’s results had been fabricated to keep Séverin from becoming the Patriarch of House Vanth as a child. Séverin reluctantly agrees and returns to the group. They all promise to help him and use a party at an opera house called the Palais de Reves to interrogate House Kore’s courier to learn where the Hours Eye is. Meanwhile, Enrique and Zofia steal an artifact from the Exposition Universelle to help them sneak into House Kore’s estate. They are attacked by a man with a strange bladed hate. Zofia steals his honeybee pendant, but neither know how he got inside the expedition. At L’Eden, Hypnos gives them all invitations for House Kore’s party, ensuring that each one of them will assume an identity that is entirely different than the person themselves. Séverin reminds Hypnos that he is not their friend, clearly hurting the other.

At the House Kore estate, everyone splits into their roles and begins working toward stealing the Horus Eye. Enrique goes with Tristan into the greenhouse to try and set a trap that will keep anyone else from following them. However, Tristan accidentally gets poisoned and, after feeding him an antidote, they are forced to hide in guard uniforms. Séverin works with Hypnos to figure out if the matriarch of House Kore is hiding the Horus Eye in her library, or underground. Laila retrieves the key from the matriarch’s office, and Zofia makes a fake one to get them inside. They all eventually meet in an underground atrium after Enrique, Zofia and Laila solve a puzzle to get themselves inside. There, they find hundreds of Horus Eyes and accidentally summon a soul-devouring monster, Ammit, when Laila finds the real one. She and Séverin work together to dispel it, and the group splits from Hypnos. However, when they reenter the greenhouse, they find that Tristan has been tortured by an item called the Phobus Helmet which makes one's' nightmares feel real. A man named Roux-Joubert, who both Séverin and Zofia met unknowingly throughout the night, takes the Horus Eye and tells them they have three days to give him Hypnos’ Babel Ring before leaving with Tristan.

The group returns to L’Eden and eventually figures out that Roux-Joubert is somehow related to House Fallen, the fourth house that was stripped of its power after trying to use a Babel Fragment to become gods. The group figures out that Roux-Joubert is in the catacombs and wants to use the Exposition Universelle to start a new revolution, though they are uncertain what that entails. Zofia learns that there is a secret entrance in the exhibit and works with a silver cloth that Séverin stole to create a barrier that will stop anyone from stepping through it. Séverin and Laila go to the catacombs as the others leave for the Exposition. Séverin and Laila find Tristan on a stage behind a red curtain, but both are captured. Tristan holds Laila at knife point, clearly traumatized (as they have kept the Phobus Helmet on him for at least three days) while Séverin is tortured by Roux-Joubert. It is revealed that House Fallen’s blood is actually golden, and it gives them the power to control men’s souls. Roux-Joubert wants to use the Babel Rings to awaken the Babel Fragment and proclaims that the doctor will allow him to ascend to godhood. He activates the fragment as Zofia, Hypnos, and Enrique manage to get into the catacombs from the other side. Zofia’s invention keeps the other House Fallen members from entering the catacombs until Roux-Joubert kills his companion and breaks open the doorway. A man in a bug mask, who Roux-Joubert calls the doctor, enters. They figure out that the Hypnos Eye needs to be placed in the center of a spiral pattern on the floor and, with Hypnos distracting the doctor, Laila is able to do it. This stops the fragment from rising as order guards, known as Sphinxes, arrive and record everything. The doctor and the surviving House Fallen members run while Roux-Joubert is left injured and furious. Hypnos promises that he will put in a good word for Séverin and the group celebrates their victory.

A week goes by and the entire group prepares for a full moon party. Only Zofia does not go, losing her nerve after she sees Enrique, who she likes, kissing Hypnos. At the party, Séverin sees Laila take the stage as her actress persona before reading a letter Tristan gave him earlier in the night. He realizes that Roux-Joubert has escaped, but is unable to stop the man as he charges into the party and throws the bladed hat. Séverin tackles Laila, not realizing that Tristan was the target. A week later, Hypnos and the matriarch of House Kore say they will give Séverin the inheritance test, but he refuses, determined to take down House Fallen for killing Tristan. However, grief pulls the group apart as the months go by. Laila tries to get to Séverin by kissing him, as the two still have strong feelings for each other after a one night stand months prior. In his grief, however, Séverin pushes her away.

Two months later, Séverin and Hypnos are planning on leave for a palace called the Winter Conclave. Laila agrees to go, but only if Séverin will take her as his mistress so she can have full access to the castle. He agrees, as he still loves her, and she burns an oath into his skin. She tells him that they will not be true lovers, as anything they do would not matter anyway before leaving. The book ends with Hypnos meeting the matriarch of House Kore at his own estate. She tells him to keep Séverin from taking the inheritance test until they find House Fallen. When he asks why, she tells him that the original test was not fabricated, and Séverin must never know he is not truly the heir to House Vanth.

More summaries and resources for teaching or studying The Gilded Wolves.