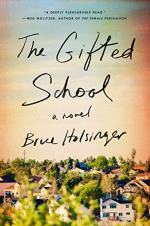 Bruce Holsinger
This Study Guide consists of approximately 53 pages of chapter summaries, quotes, character analysis, themes, and more - everything you need to sharpen your knowledge of The Gifted School.

This detailed literature summary also contains Quotes and a Free Quiz on The Gifted School by Bruce Holsinger.

The following version of this novel was used: Holsinger, Brian. The Gifted School. Penguin, 2019. Kindle.

The novel begins with a present-tense prologue in media res that depicts Emma Z taking the CogPro test as a way to gain admission into Crystal Academy. Part 1 opens with an ad in the New York Times for the Head of School at Crystal Academy. The first chapter, depicted in past tense (as all chapters moving forward are) starts months before, when no one in Crystal had even heard of the academy. The four main women are introduced as they meet up for cocktails: Rose, Samantha, Azra, and Lauren. They all have children in elementary school, and they all spend lots of time talking about where to send them for high school. Rose, a neurosurgeon, and Gareth, a failed writer, were married and have an intelligent daughter named Emma Q. Samantha and her husband, who was on the city council and came from old money, have a beautiful and slightly spoiled daughter named Emma Z. Lauren is a widow and has two extremely gifted children, Tessa and Xander. Xander is on the spectrum, but is incredible at chess and math. Tessa, a junior, is the oldest child. She has just gotten out of rehab and is attempting to win back trust and respect from her mother and her friends. Azra has twins who play competitive soccer with her ex-husband, Beck, who had left Azra for their nanny, Sonja.

The friends all get together for Thanksgiving and discussed the news of Crystal Academy, a public magnet school for exceptionally gifted children. They all wanted their children to get in, though Lauren made a scene at the dinner table by telling Tessa she could never do it. Tessa lamented the day on her vlog, which she films for her friends from rehab as their preferred form of communication. Ch’ayña and her daughter, Silea, and her grandson, Atik, go to clean the Zellar’s house after Thanksgiving. Atik makes intricate origami creations of his own design and leaves them in Emma Z’s bedroom.

An email goes out to all the Crystal families instructing the parents to sign their child up for the standardized CogPro test if they would like to be considered for admission into the Academy. Lauren, Rose and Samantha take the Emmas and Xander to take the test together, and Tessa takes the test secretly.

Azra wants the twins to take the test, but Beck does not believe in elite educational programs, so he discourages the boys from taking the test. However, Aidan wants to take it, and Beck does not stop him. Beck takes the boys skiing with Sonja and their new baby. He brings Tessa along to babysit, as they had been trying to give Tessa more responsibility. Azra has even hired her at her clothing boutique. When Beck and Sonja get in an argument, though, Beck gets into the hot tub and Tessa comes out. He smokes a joint with her and they talk about her dead father, whom he had been close friends with.

Ch’ayña does want Atik to take the test, because she is afraid of what it could do to him, but he takes it anyway.

Rose starts to grow concerned when her daughter starts making mean comments about the intelligence of other kids at her school, but she forgets about her concerns when she receives word that Q has passed the first round of admissions with a CogPro score of 135. Samantha said Z also pass, as does Aidan, Tessa, and Atik, but Xander, who everyone thought was a shoe-in, fails the verbal test. Lauren appeals and wins, and then the Academy announces that prospective students will next need to submit a portfolio exhibiting their non-academic strengths.

The town grows divided as the admissions process continues. Concerned citizens begin to argue that standardized tests are biased, while others argue that the scores should not be weighted by district and demographic. Rose grows panicked when she sees how upset her daughter is at the idea of Z getting into the Academy without her, so Rose calls the new principal, Bitsy Leighton, and makes up a lie about having a research project at the hospital she wants to collaborate with the Academy on. She meets with Bitsy and tries to figure out how best to get Q into the school. Xander starts designing a project based around genetics and chess, and he steals DNA samples from his friends’ homes. Tessa sneaks into Kev’s email account while babysitting Z and sees an email stating that Z did not pass the CogPro test.

The Emmas get into trouble at school for forming an exclusive club and bullying students based on their intelligence. Samantha and Rose make them write apology letters. The twins start to fight and clash more as they fight for the same spot on an exclusive soccer team. Rose decides to steal a project the Emmas have worked on together and turn it in as Q’s work alone. Z hears her parents talking about her low CogPro score and feels confused.

Ch’ayña asks Rose to turn in Atik’s portfolio because a work emergency has come up. Rose agrees, but quickly forgets when she gets called into work by her boss, who has discovered her lie to Bitsy Leighton. Rose is fired from the important project she was working on. When Rose gets home, her daughter shows her a vlog of Tessa and Beck in a hot tub together. She calls Azra, who confronts a baffled Beck.

Crystal Academy throws an open house where all the portfolios from the prospective students are displayed for the community. Samantha admits that she lied about Z’s scores, and Rose admits that she lied to Bitsy and got fired. The Emmas discover the project Rose stole from Z and turned in. Xander presents his project, which proves a relationship between genetics and chess-style, and also suggests that Gareth is Z’s father. Beck decides to get his life in order and Rose decides to divorce Gareth. Tessa and Xander get accepted into Crystal Academy, and the women get together in an attempt to mend their long-lasting friendship.

More summaries and resources for teaching or studying The Gifted School.