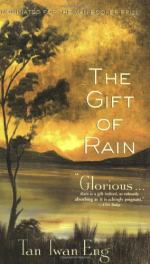 Tan Twan Eng
This Study Guide consists of approximately 59 pages of chapter summaries, quotes, character analysis, themes, and more - everything you need to sharpen your knowledge of The Gift of Rain.

The Gift of Rain Summary & Study Guide includes comprehensive information and analysis to help you understand the book. This study guide contains the following sections:

This detailed literature summary also contains Quotes and a Free Quiz on The Gift of Rain by Tan Twan Eng.

Philip Hutton was an elderly half-Chinese, half-British man living out his days in relative peace in his ancestral home of Istana on Penang, an island in Malaya. Everything changed and he was forced to come to terms with his past when a Japanese woman named Michiko Murakami turned up on his door step. She was seeking information on someone named Endo-san, a mutual friend of theirs whose bonds of love went much deeper than friendship. Upon Michiko’s request, Philip told his tale of the life he and Endo-san led together.

Philip had been a lonely child. Being born half-Chinese and half-British made both cultures equally despise him. He felt too Chinese to fit in with his British family, and because he came from a British family, the Chinese customs were foreign to him. When a Japanese man moved onto the island across from Philip’s home Philip quickly latched on to him, entranced by not only the Japanese culture but by the man himself. This man, named Endo-san, would come to take Philip as a pupil, teaching him martial arts and sword fighting.

Philip’s family was away on holiday in England while he stayed around to watch Istana, their family mansion. He trained with Endo-san and excitedly showed him around the islands. The condition of Europe worsened as Hitler invaded Poland. Miraculously, Philip’s family returned to Penang safe, though their journey took longer than expected. With the family back Philip began working for his father’s company Hutton & Sons in 1940. Much of Philip’s cultural identities entangled themselves there as he reconciled both his British heritage and his Chinese heritage. Philip’s brother William joined the Navy, like many, fearing war in Malaya. They held a going away party which represented the last peaceful moments of Philip’s life. War broke out soon after with the Japanese attacks on Pearl Harbor.

When the Japanese arrived to the islands they met little-to-no resistance, as many British had fled when war broke out. The Japanese Occupation officially began on February 15, 1942 when Singapore surrendered. Philip, with his connections through Endo-san, worked for the Japanese, despite his family vehemently opposing it. Philip thought this was the only way to secure his families safety. He was half-right, and while his family was not sent to one of the many labor camps like other British, they all eventually died in resisting their oppressors anyway. William died in battle; Edward, Philip’s other brother, was captured while he was on another Island and sent to a death camp; Isabel, Philip’s sister, died assisting the Japanese resistance movements; and Philip’s father died sacrificing himself to save Philip from execution. Philip resisted the Japanese in the end through subterfuge and spying. Throughout this time, Philip learned that his friendship with Endo-san, and more specifically his showing him around the islands, directly affected the ease of which the Japanese conquered Malaya.

The Japanese eventually lost the war thanks in no small part to the atomic bombs dropped by the Americans, and the British returned to Malaya. Philip saved Endo-san from his punishment laid out by the war tribunal. Using a sword gifted by Endo-san himself, Philip took his old master’s life to save him from a lifetime in some awful prison.

Philip finished his story to Michiko, and some time after, she died too, a long time sufferer of radiation poisoning from the atomic bombs dropped on Hiroshima and Nagasaki. Philip felt a sense of completion and joy in telling his story again, and by telling it, freed himself from much of the guilt and anguish that he had held onto for all these years.

More summaries and resources for teaching or studying The Gift of Rain.

The Gift of Rain from BookRags. (c)2022 BookRags, Inc. All rights reserved.