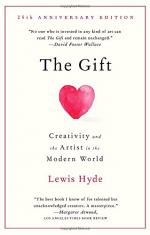 The Gift: Creativity and the Artist in the Modern World Summary & Study Guide

Lewis Hyde
This Study Guide consists of approximately 47 pages of chapter summaries, quotes, character analysis, themes, and more - everything you need to sharpen your knowledge of The Gift.

The Gift: Creativity and the Artist in the Modern World Summary & Study Guide Description

The Gift: Creativity and the Artist in the Modern World Summary & Study Guide includes comprehensive information and analysis to help you understand the book. This study guide contains the following sections:

This detailed literature summary also contains Topics for Discussion on The Gift: Creativity and the Artist in the Modern World by Lewis Hyde.

The following version of this book was used to create this study guide: Hyde, Lewis. The Gift: Creativity and the Artist in the Modern World. Random House, 2007. Second Vintage Books edition.

Beginning with a short analysis of cheap drugstore romance novels, Lewis Hyde asks what distinguishes works of arts, even those that are bought and sold, from pure commodities that circulate in the marketplace. He suggests that all works of art are gifts and that they must therefore exists, paradoxically, in two economies: the market economy and the gift economy. Art works are created as gifts and they spring from certain talents, inspirations, or muses that are themselves gifts as well. Hyde explores this paradox—the idea of art as a gift and the persistent problem of market commodification—throughout the book by drawing upon cultural anthropology, sociology, fables and fairy tales, and, especially, the lives of two famous poets.

Part one of the book outlines a theory of gift exchange with special attention given to its ramifications for art and creativity. In the first three chapters, “Some Food We Could Not Eat,” “The Bones of the Dead,” and “The Labor of Gratitude” Hyde examines the basic characteristics of the gift by drawing upon cultural anthropology and providing very close readings of certain gift-giving societies throughout history. Every gift, he argues, exemplifies motion. A gift given is always a gift that is supposed to be given away again rather than kept as a consumer good or hoarded as a piece of individual property. Gift-giving is about keeping the gift and the spirit of the gift in constant motion. This motion constitutes a circle as in certain tribal societies such as the Kula of New Guinea. The figure of the circle prevents the gift from being controlled by individual egos as it requires at least three participants. The circular motion of the gift increases abundance, generosity, and, especially, the flourishment of life. Hyde argues that gift exchange, in this model, facilitates social cohesion and engenders collective feelings of gratitude and compassion on the part of both the giver and the receiver.

The next two chapters, “The Bond” and “The Gift Community” speak to the social effects of the gift. Hyde suggests that one of the main differences between the gift and a standard commodity is that the former, by virtue of its circular motion, establishes a very distinct and powerful emotive bond between the giver and the receiver. This bond eschews the values power, debt, and obligation characteristic of the market economy. The bond, along with the circular motion, constitute a gift exchange community or a gift society. Moreover, Hyde shows that the gift itself, or, in some cases, property that circulates as a gift, provides internal social coherence and endurance. Unlike the social contract which underwrites most modern, liberal societies, Hyde argues that the gift community is sustained by a contract of the heart that necessarily limits the society’s size and scope. Persons within this community share a common belief that giving part of the self away, rather than restraining or inhibiting it, forms the bedrock of a healthy, functioning society.

The final two chapters of Part One, “A Female Property” and “Usury: A History of Gift Exchange,” discuss instances in which human beings are themselves taken to be gifts (wedding practices, for example) and the history of usury and interest, respectively. Hyde suggests that wedding practices in which women are given has gifts from a father to a suitor are instances of gift-giving where the property being given is an expression of the human will or the right of action. On the other hand, however, this practice of the will of the person in this case is subject to another, hence an uneven power dynamic. Hyde uses this distinction to discuss the ways in which gift exchange is typically registers as a feminine type of commerce in modern capitalist societies, whereas commodity commerce indicates a more masculine form of exchange. Understanding this gendered dynamic is paramount to intervening within the paradox of the gift. Similarly, properly examining the history and function of usury is necessary in order to highlight the ways in which the gift—and, by extension, art and creativity in general—are often devalued in the contemporary world. In this respect, Hyde pinpoints the Reformation as a watershed moment in the history of the practice of usury where unfair loan and interest practices come to be sanctioned, laying the foundations for modern capitalism. By making a necessary distinction between secular and religious rule, Protestant Reformers like Martin Luther unwittingly privatized property as well as faith, shattering the emotive bond that undergirds a society sustained by gift exchange.

“The Commerce of the Creative Spirit,” the first chapter in Part Two, contain Hyde’s more constructive work in bringing the theory of the gift outlined in Part One to bear on art and creativity in contemporary society. The artist’s work, Hyde argues, comes from a source of inspiration (a gift) that often lies outside his or her immediate control. By channeling this gift and creating something that is then given to the world, the artist keeps the gift in motion. Eventually, the motion comes full circle as the artist offers some insight, often mythological, as to where the source of the gift lies. Walt Whitman and Ezra Pound, two modern poets Hyde examines in detail in the final two chapters of the book, provide two salient examples: individual mystical genius and the influence of tradition, respectively. Once this spirit of the gift is identified (or mythologized) the artist is free to respond with the labor of gratitude and generosity by offering a work of creation to the world. This, too, keeps the gift in motion, Hyde argues, and can go a long way toward freeing art from insipid mechanics of pure commodity exchange in the marketplace.

The final two chapters of the book contain case studies that exhibit all the characteristics of the gift Hyde discusses earlier in the text. These chapters are an attempt to analyze the life of an artist (or a poet) using the language of the gift. In the case of Walt Whitman, gift exchange is a type of erotic commerce where self and other are conjoined and participate in a deep, profound sense of unity. Through close textual readings of Whitman’s work, namely Leaves of Grass (especially “Song of Myself”), Children of Adam, and Calamus, Hyde shows how Whitman typifies the figure of the artist as both gift-receiver and gift-giver. In Ezra Pound, Hyde sees a certain tension between individual willpower and the imagination that is reflective of the general paradox of art and creativity (i.e., their dual existence in opposing economies). By carefully examining Pound’s work and his life, including especially his troubling relationship with fascism, Hyde outlines both the promise and the risk of understanding art and creativity in terms of gift exchange.

In the concluding sections of the book, Hyde offers some remarks about how his position has changed through the course of his research and writing. The paradox of creativity and art in the modern world—that they always exist simultaneously in a gift economy and a market economy—is, finally, irresolvable. Rather than alleviating this tension, Hyde suggests that artists and creative personalities seek to enter the marketplace without allowing it to destroy the spirit of the gift and its circular motion. He offers some modest proposals as to how this might work itself out concretely and suggests that the anecdotes and fairy tales examined in Part One of the book perhaps offer the most useful and compelling insights: that the gift and be represented, experienced, or witnessed, but never rationalized or explained.

More summaries and resources for teaching or studying The Gift: Creativity and the Artist in the Modern World.

The Gift: Creativity and the Artist in the Modern World from BookRags. (c)2022 BookRags, Inc. All rights reserved.