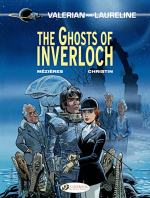 The Ghosts of Inverloch, The Wrath of Hypsis, On the Frontiers (Valerian) Symbols & Objects

This Study Guide consists of approximately 49 pages of chapter summaries, quotes, character analysis, themes, and more - everything you need to sharpen your knowledge of The Ghosts of Inverloch, The Wrath of Hypsis, On the Frontiers.

The Spatio-Temporal Agency is symbolic of the future. The symbolism is indicative of the tenuous nature of Valerian's future. Several of the characters of this three-novel episode work for the Agency.

This is the name of the weather ship that Lord Basil commandeers for the mission. It symbolizes the British effort to help avert the crisis. In addition to the normal crew, Valerian, Laureline, Albert, the Superintendent, the Shingouz, and Ralph are all on board.

This is the ship Valerian and the others are hunting. It symbolizes the next clue in their effort to avert the crisis. The ship is not a normal Earth ship and is not manned by Earth people of the 1980s.

Hypsis is a planet that can move about at the will of its inhabitants. It is symbolic of Heaven and is the home of...

More summaries and resources for teaching or studying The Ghosts of Inverloch, The Wrath of Hypsis, On the Frontiers (Valerian).

The Ghosts of Inverloch, The Wrath of Hypsis, On the Frontiers (Valerian) from BookRags. (c)2023 BookRags, Inc. All rights reserved.