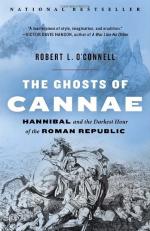 The Ghosts of Cannae: Hannibal and the Darkest Hour of the Roman Republic Topics for Discussion

Robert L. O'Connell
This Study Guide consists of approximately 25 pages of chapter summaries, quotes, character analysis, themes, and more - everything you need to sharpen your knowledge of The Ghosts of Cannae.

What was the Roman military like, including strengths and weaknesses?

What was the Carthaginian army like, including strengths and weaknesses?

Why were the Romans at a disadvantage at the battle of Cannae?

What happened to the survivors of the battle of Cannae?

How were elephants used in battle and what were the pros and cons of using them?

Why was Scipio important for the Romans?

How did the Romans get their revenge on Carthage and how long did it take to take?

More summaries and resources for teaching or studying The Ghosts of Cannae: Hannibal and the Darkest Hour of the Roman Republic.

The Ghosts of Cannae: Hannibal and the Darkest Hour of the Roman Republic from BookRags. (c)2021 BookRags, Inc. All rights reserved.