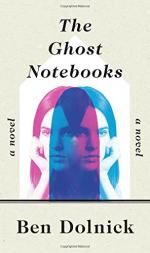 This detailed literature summary also contains Quotes and a Free Quiz on The Ghost Notebooks by Ben Dolnick.

The following version of this book was used to create this study guide: Dolnick, Ben. The Ghost Notebooks. New York: Pantheon Books, 2018.

Nick Beron, the protagonist and narrator, narrates the book in the past tense as he recalls the events of the narrative. He used to live in New York City with his long-term girlfriend, Hannah Rampe. When they were about 30 years old, they experienced some tension regarding the subject of marriage. Nick was hesitant at first, but he suddenly realized that he did in fact wish to marry Hannah. They became engaged, and Hannah accepted a job offer to be the caretaker of a historic house in Hibernia, a town in upstate New York. They moved to Hibernia, which was fairly rural, and they arrived at Wright House, the historic house (now a museum) that was once the residence of famous literary figure Edmund Wright. Wright lived in the 1800s, and the house is rumored to be haunted.

About one month after moving into the house, Hannah fell mysteriously ill. She also stopped taking her anti-psychotic medication, which she had been taking since she had a mental breakdown years ago in college. She also became obsessed with the notes written by Jim (the previous caretaker) that Jim had left behind in the house. Nick became worried about Hannah and told her to call her psychiatrist, Dr. Blythe. One morning, Nick awoke to find Hannah missing. The town formed a search party, and they eventually found Hannah’s body by the river, apparently drowned.

Nick, grieving, went to live temporarily in the New York City apartment where Hannah’s parents lived. However, when they found out that Nick had failed to tell them about Hannah’s apparent decline in health, they blamed him for Hannah’s death, and they ejected Nick from their apartment. Nick then decided that he would do his utmost to find out the exact cause of Hannah’s death. He began by stealing her patient file from Dr. Blythe’s office. The file notes that, during a phone call with Dr. Blythe, Hannah made a cryptic reference to Jan Kemp, a resident of Wright House who mysteriously went missing in 1958. Nick drove to Wright House to look for more information, but the police caught him and arrested him for stealing Hannah’s patient file.

Nick was sent to a mental institution in upstate New York. There, therapists counseled him to simply accept the ambiguities surrounding Hannah’s death. Nick soon learned that one of his fellow patients was Jim, the previous caretaker of Wright House. Jim told Nick of ghostly visitations that he had experienced at Wright House. Jim concluded that if someone died in or near the house, their spirit became trapped instead of continuing on in a cycle of reincarnation. Moreover, it appeared that the ghosts tried to kill people in order to take that person’s place in the cycle of reincarnation. Jim believed that these spirits had been responsible for the deaths of Edmund Wright, Jan Kemp, and Hannah Rampe.

Nick escaped the mental institution and traveled on foot back to Wright House. There, he discovered a notebook written by Hannah. It seemed that she had also experienced ghostly visitations. Nick exhumed Wright’s grave in order to read the ghost-related notes rumored to have been hidden in his coffin. After reading the notes, Nick burned Wright House down in an attempt to free all of the spirits trapped there.