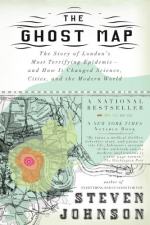 The structure of the telling of the 1854 cholera epidemic in the Soho district of London is an unusual one. There are basically eight chapters which are designated by dates during the epidemic. Although the cholera bacteria was a virulent strain that spread rapidly, it only lasted a week.

The first chapter is entitled, “Monday, August 28: The Night Soil Men.” In this section, the state of London’s sanitation and sewage problems are described along with the underclass who dealt with the refuge. It also provides an account of patient zero, the first patient who contracted the disease and began the epidemic.

“Saturday, September 2: Eyes Sunk, Lips Dark Blue” introduced curate Henry Whitehead of St. Luke’s Church who knew the people of Soho, many of whom were his parishioners. Whitehead was ultimately instrumental in convincing city officials of the source and cause of the epidemic.