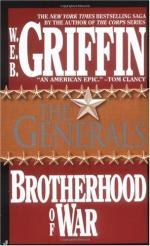 W. E. B. Griffin
This Study Guide consists of approximately 30 pages of chapter summaries, quotes, character analysis, themes, and more - everything you need to sharpen your knowledge of The Generals.

The Generals: Brotherhood of War 06 Summary & Study Guide includes comprehensive information and analysis to help you understand the book. This study guide contains the following sections:

This detailed literature summary also contains Topics for Discussion and a Free Quiz on The Generals: Brotherhood of War 06 by W. E. B. Griffin.

The Generals - The Brotherhood of War by W.E.B. Griffin is the story of the people who make the decisions. The fate of many men and women was in their hands in the jungles and swamps of Southeast Asia. It is a different kind of war than others, but they must be prepared to make the decisions, and prepared they are.

This book focuses on the lives of people in the Army, particularly the Green Berets. The book covers mostly the officers like Felter, Hanrahan, Jiggs, Bellmon, etc. These are the men in command and the book looks at how they make their decisions and why. It reveals the rivalry between the services and that between Airborne and Armor within the Army. The overlap of duties sometimes leaves them squabbling over who should be in charge of what.

The book opens and closes in Vietnam. In between is the Cuban missile crisis and a look at how the Army was preparing for an invasion of Cuba. Lowell is charged with helping Fort Hood transport its tanks on extremely short notice, a problem he solves for them, even though he circumvents regulations. While the tanks are in route, the Russians agree to remove their missiles from Cuba so the tanks and equipment are returned.

Griffin allows the reader to follow certain characters from assignment to assignment; one of these characters is Craig Lowell. Lowell and his cousin Geoff Craig are from a wealthy family. Geoff wants out of the Army as soon as possible from the beginning while Lowell is intent on making a career in the Army. Lowell is assigned to the John F. Kennedy Center for Warfare at Fort Bragg, which is the headquarters for the Green Berets. They soon begin planning and training for the super secret Operation, Monte Christo, which is to rescue prisoners from the Hanoi Hilton.

Griffin writes a very interesting book that is quick and easy reading and guaranteed to hold the reader's interest, from the first to the last page. The different assignments take the characters to various places as they serve their country. The Generals - Brotherhood of War is recommended for people who like a good suspense-filled novel.

While training for the mission, Lowell becomes romantically involved with Dorothy Simms, the wife of a POW who is being held at the Hanoi Hilton. This results in the moral condemnation of many people. People in the military who keep their eyes open become aware of various things without being told and began to suspect that a rescue mission is being planned. Lowell finds out about the mission from his cousin Geoff who has put certain facts together and asks to be a part of the rescue mission. A few hours later, he finds that Dorothy has also made an accurate guess. In addition, the wife of the commander of Fort Bragg overhears two Air Force wives discussing the situation. Is the mission compromised? Will it have to be aborted?

More summaries and resources for teaching or studying The Generals: Brotherhood of War 06.

The Generals: Brotherhood of War 06 from BookRags. (c)2022 BookRags, Inc. All rights reserved.