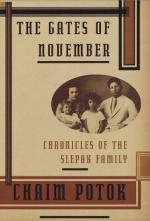 The Gates of November: Chronicles of the Slepak Family Summary & Study Guide

The Gates of November: Chronicles of the Slepak Family Summary & Study Guide Description

The Gates of November: Chronicles of the Slepak Family Summary & Study Guide includes comprehensive information and analysis to help you understand the book. This study guide contains the following sections:

This detailed literature summary also contains Topics for Discussion and a Free Quiz on The Gates of November: Chronicles of the Slepak Family by Chaim Potok.

The Gates of November by Chaim Potok tells the tale of the Slepak family. The father was a Jewish high-ranking communist officer and his son was an anti-Communist. This novel showed how both generations struggled to survive throughout Russia's turbulent history.

Solomon was a young Russian man whose family wanted him to become a rabbi. This is not what he wanted to do with his life so he left home. After working his way through Europe to obtain enough funds for passage to America, he set sail. Living in America, he met other Russians, and they learned about uprisings and political unrest in their homeland. He moved back to help his people, sneaking into the country and setting up a press to inform readers and turn them against the government. Sent to jail, Solomon was sentenced to death, but at the last minute was sent to a work camp instead. At the work camp, he helped stage a successful uprising and soon became the leader of thousands of Bolsheviks. His success during uprisings help him quickly rise in the ranks of the Bolshevik party.

Volodya was Solomon's son. He had a happy childhood, but as he grew older, he saw how the Communist Party treated Jews. Although the family didn't practice any religion, Volodya knew he was a Jew. So did other people, and this made it very difficult to get a job. He saw other Jews falsely accused of crimes and put on trial. The unfairness found in his own world and in others turned him against the party, even though his own father was a huge supporter. It caused a rift between father and son, especially when Volodya told his father that he was applying for an exit visa to leave the country, along with his family, and go to Israel. Solomon said he would do anything he could to prevent this.

Now an enemy of the country because he was trying to leave, Volodya and his family were denied their exit visas for seventeen years. It was a struggle surviving as a Jew in Russia with the KGB constantly checking up on Volodya and his wife since the government knew they were trying to leave. Volodya regularly lost his job because his lawyers didn't want to have the KGB around. He was imprisoned many times and spent five years in exile in Siberia for his protestations. Volodya and his family were not the only Jewish Russians denied exit, and their protests helped draw the attention of the world. There was an increase in global support as people learned about the family's situation and the political oppression in Russia.

The author hoped that by telling the tale of Solomon and Volodya, readers would be able to identify with the father and son relationships. He also hoped readers would understand more about the political situation in Russia and the plight of the refuseniks. This particular story was intriguing because it involved two generations of men dedicated to their causes, but the causes were complete opposites.

The Gates of November: Chronicles of the Slepak Family from BookRags. (c)2022 BookRags, Inc. All rights reserved.