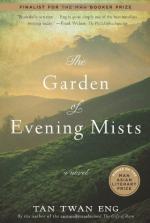 The Garden of Evening Mists Summary & Study Guide includes comprehensive information and analysis to help you understand the book. This study guide contains the following sections:

This detailed literature summary also contains Quotes and a Free Quiz on The Garden of Evening Mists by Tan Twan Eng .

This guide is based on the Kindle edition of the book, copyrighted 2012.

Judge Teoh Yun Ling announces her retirement earlier than her peers expect. She is one of the first women appointed to a seat on Malay's Supreme Court. She does not tell any of her coworkers that she has been diagnosed with a neurological disorder. She begins to forget words and knows the disease will progress to the point that she is unable to express herself or understand verbal and written words.

Ling is the third child of a Malaysian family that was affluent until Japan declared war on their country. She reminisces on the war, looking back at the years before her judgeship. The Japanese invaded Malaysia shortly before attacking Pearl Harbor. Ling, her sister Yun Hong, and their parents fled the city, hoping to be safe from the Japanese army. Soldiers caught them, beat the girls’ parents, and took Ling and Hong captive along with many others.

Life in the prison camp was brutal. Hong was beautiful and was immediately chosen to work in the camp brothel where she was raped daily by the Japanese soldiers. Ling soon realized that the key to survival was to play a role. She managed to get herself assigned to the camp kitchen where she was able to sneak food out to Yun Hong and to the other women in the camp. She was caught one day and an officer cut off two of her fingers. Together, Ling and her sister mentally created a Japanese garden such as they'd seen during a visit to Japan. They used that as a means of escaping the cruelties of their lives.

Another officer, Tominaga Noburu, made Ling his personal interpreter after the previous interpreter died. The prisoners dug deep into the mountain and boxes of items were stored there. Tominaga was kinder than most Japanese officers. When it became obvious that Japan was going to lose the war, Tominaga took Ling from the prison camp. He gave her food and water, then told her to follow the river to a town where she would find help. She refused to leave Yun Hong and returned to the camp but saw Tominaga blow up the face of the cave. She then heard a series of explosions in the distance and knew that the prisoners were all dead.

An aboriginal boy found Ling and helped her to safety, making her the only prisoner to survive the camp. Ling spent the next years working in the judicial system while Japanese officers were tried for their war crimes. She fruitlessly hoped to find an officer who could help her locate the prison camp in order to properly bury the prisoners.

Later, Ling visited friends who owned a tea plantation and met a Japanese man named Aritomo. He had an extensive garden called Yugiri and was the Japanese Emperor’s former gardener. Ling asked him to create a garden in honor of Yun Hong's memory. He refused, but agreed to teach Ling so that she could do it herself. Gradually, Ling and Aritomo became friends. One day, he asked Ling’s permission to create a horimono, an elaborate tattoo that would cover Ling's entire back. She agreed. Soon after it was finished, Aritomo went for a walk in the jungle and never returned. Ling remained in the house for some time until she left to pursue her legal career.

Returning to her present, Ling’s first act after retirement is to return to Yugiri. Professor Yoshikawa Tatsuji, a respected Japanese writer, asks to write a book about Aritomo's wood carvings. Ling agrees though she has routinely turned everyone away from the gardens and has never talked about Aritomo or their relationship. Over the weeks of Tatsuji's visit, he tells Ling that he knows about Aritomo's life, including the fact that the Japanese government sent him to Malaya to oversee the hiding place of stolen valuables. Gradually, Ling realizes that Tatsuji's theories are correct, and that the tattoo on her back is a map of the hiding place. Yugiri is the key to understanding the map and Ling knows that she needs to change the garden so that no one will ever be able to follow the map. She does, realizing that the new garden will be a memorial to both Aritomo and Yun Hong and that she will someday walk into the jungle and disappear, just as both Aritomo and Yun Hong had done.

The Garden of Evening Mists from BookRags. (c)2022 BookRags, Inc. All rights reserved.