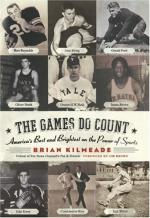 The Games Do Count Summary & Study Guide includes comprehensive information and analysis to help you understand the book. This study guide contains the following sections:

This detailed literature summary also contains Topics for Discussion on The Games Do Count by Brian Kilmeade.

The Games Do Count is a compilation of essays written in the words of the people who participated in a project, describing how sports shaped their lives and helped them to become successful in their chosen careers. This book is an intimate peek into the lives of some of America's brightest people, including politicians, businessmen, and celebrities. Also included is a discussion of the impact of sports on the lives of a few of the heroes of Flight 93, an impact that might have culminated in their heroic actions on the final day of their lives. It is a touching and sometimes heart wrenching book that will inspire all who read it.

Brian Kilmeade considered for quite some time a book about the impact of sports on the lives of successful people. However, it was not until September 11, 2001, and the subsequent investigation he conducted into the lives of the brave people on board Flight 93, that Brian truly realized the importance of sports on a person's life. He decided to share this idea with his readers. Brian spoke to more than seventy businessmen, writers, entertainers, and the family members of several of the men on board Flight 93 and compiled a group of essays expressing these people's feelings toward sports and the impact of sports on their lives.

There are many things people credit sports for as an impact on their lives. Many of the people profiled in this book credit the activity of organized sports as saving them from a life of crime that boredom and misdirection might have provided for them otherwise. Many credit sports with teaching them the importance of working as a member of a team and working together for a common goal. Then there are those who saw sports as an escape from an unhappy life, whether it be trouble at home or an inability to fit in with the other children at school.

Sports do more for most people than build muscles. Brian Kilmeade has proven in his book that sports can impact a life in many different ways. There are those profiled in this book who credit sports with creating in themselves a character that might not have developed without the discipline of sports. Others contend that sports taught them how to be strong, how to believe in themselves, and how anything is possible with hard work and discipline.

Then there are those who believe sports helped to prepare them for their lives in general. Many in politics compare sports to politics, claiming the competitiveness of politics is similar to that seen in sports. There are also a few who claim that to be successful in politics, they must learn to work as a team, which many have done by playing such games as basketball and baseball.

Others credit sports with taking them out of a middle-class existence and presenting them with the opportunities of college and a broader career choice. Many of the people profiled in this book come from lower-middle-class households and might not have had a chance at college if not for sports. Others found that the inability to participate in sports led to other interests that led not only to college but career opportunities. Sports are highly important to many people and the successful people profiled within this book prove that fact over and over with their highly personal stories.