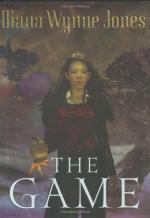 This novella is filled with references to stars, constellations, planets and astronomical bodies. Orion, the Seven Sisters, Jupiter, comets and the constellations representing the signs of the zodiac all play major roles in the story.

There are at least three generations of gods and demigods within the story. Grandfather, grandmother, and Uncle Jolyon belong to one, the aunts belong to the next and the cosuins and Hayley belong to the last.

This novella is mired in veiled references to Greek mythology. The characters are gods or...