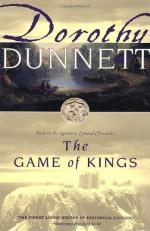 Dorothy Dunnett
This Study Guide consists of approximately 38 pages of chapter summaries, quotes, character analysis, themes, and more - everything you need to sharpen your knowledge of The Game of Kings.

The Game of Kings Summary & Study Guide includes comprehensive information and analysis to help you understand the book. This study guide contains the following sections:

This detailed literature summary also contains Topics for Discussion and a Free Quiz on The Game of Kings by Dorothy Dunnett.

The Game of Kings is the first novel in an epic series written by Dorothy Dunnett. It is set in Scotland, in 1547, the reigning period of Mary Stuart, still a child queen. The fringes of the country are fraught with outbreaks of fighting and the government is at a critical decision point, trying to weigh its relationships with France, England and Spain. The main character, Crawford of Lymond , traverses the Scottish border with England. Formally a citizen of Scotland, he was accused of treason and escaped to live as an outlaw. Despite his reputation, Francis has his strong points. He is a charismatic man, popular with women for his looks, and knowledge of romantic poetry, as well as his skill with the sword. His charisma affords him many safe havens and the danger that surrounds him only adds to his allure. His methods may seem dubious, and his morals may seem skewed, but at heart he is a son of Scotland and wants what he believes is best for his country, even if that means fighting to win it. With this as his goal, Francis enlists the help of many men, thus creating his own small army.

The mercenary soldiers are loyal to Crawford and to one another. Francis has one brother, Richard Crawford, whom he is at odds with. Richard fights for the Scottish army and is interested in bringing his brother back to face punishment for his accused crimes. Sibling rivalry also plays a part in the tension between them. The Game of Kings simultaneously traces Francis' adventures back and forth over the border as well as the push and pull of his relationship with Richard. Over the course of the book, the reader learns that Francis' motivation for all things in life is his sense of loyalty, although it isn't until the end of the book, when he risks his life to protect the queen's secret, that his character is redeemed.

Following his risk-taking on behalf of the queen, Richard views his brother differently. Richard becomes his brother's care giver and cares for the wounds he incurred. They verbally spar but learn to appreciate one another. In a complete reversal of intentions, Richard prepares to help Francis flee the country. They are intercepted and Francis is arrested and tried for treason. A few key men speak publicly on Francis' behalf. One man whom Francis had been unable to contact while still alive spoke posthumously through his confession. His letter spoke of a conspiracy against Crawford and he was found not guilty for crimes against the state.

More summaries and resources for teaching or studying The Game of Kings.

The Game of Kings from BookRags. (c)2022 BookRags, Inc. All rights reserved.